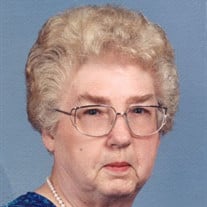 Arlene M. Horner, 90, of Hampton, Iowa, passed away Tuesday at her home in Hampton. She was born May 31, 1924, to George Sr. and Ida (Lauterbach) Abbas, in Franklin County, Iowa. Arlene graduated from Geneva High School and then attended Iowa... View Obituary & Service Information

The family of Arlene M. Horner created this Life Tributes page to make it easy to share your memories.

Send flowers to the Horner family.