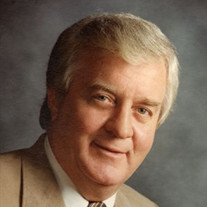 Arnold (A.C.) Benton, 83, of Hampton, Iowa, died on Thursday, February 7, 2013, at the Franklin General Hospital Nursing Facility in Hampton, Iowa. A.C. was born on Sept. 28, 1929 on the family farm in Guthrie County, Iowa to Charley and Helen (Sheeder) Benton. He graduated from Guthrie Center, Iowa high school in 1947. After high school he had several jobs before coming to Hampton in Jan. of 1950, to sell John Deere machinery for the company store. This started his long career in the John Deere business. He bought the company store in the early 1950's and continued in the business until 1985. At one time he had three stores, Hampton, Iowa Falls, and Geneva. For many years he was the highest volume dealer in the Moline branch of the John Deere Company. During his years with Deere he acquired many acres of land in Northern Iowa and also Southern Iowa. Farming the land was one of the great joys of his life. A.C. was united in marriage to Neva Davis on Jan. 25, 1960. After marriage they made their home in Hampton. After selling the dealership and much of the land A.C. and Neva started a new phase of their lives in Reno, Nevada. In 1995 he became a major investor in a startup bank in Reno. He was a director on the bank board for 15 years. He enjoyed this very much, as he had been involved with different banks over the years. A.C. was a very generous person. Nothing gave him more joy than helping people in need. In his leisure time he enjoyed fishing with his son and grandson. During their 53 years of marriage A.C. and Neva enjoyed traveling to many countries, seeing different cultures. A.C. is survived by his wife Neva of Hampton, son David Benton of Hampton, daughter Terry (Jeff) Markham of Bend, Oregon, three grandchildren, Joel Benton of Hampton, Amanda Markham of Chicago, and Molly (Adam) Baslow of Charleston, South Carolina, also three great grandchildren and two sisters Doris (Don) Laughery of Guthrie Center and Darlene Stringham of Guthrie Center. He was preceded in death by his parents and a son Tim. In lieu of flowers memorial may be directed to Hospice of North Iowa or a Charity of your choice. Burial will take place at the Hampton Cemetery.

The family of Arnold (A.C.) Benton created this Life Tributes page to make it easy to share your memories.

Send flowers to the Benton family.