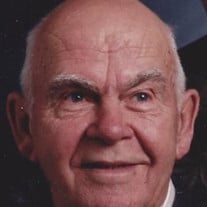 Arnold Herman Oltmann, 88, of Hampton, Iowa passed away July 14, 2015, at the Rehabilitation Center of Hampton in Hampton, Iowa. Arnold Herman Oltmann, the son of Herman and Grace (Abbas) Oltmann was born May 20, 1927, on the family farm near Latimer, Franklin County. Arnold grew up in the Latimer area where he attended country school. Arnold was united in marriage to Shirley St. John on October 11, 1950, at the Trinity Reformed Church in Allison by Rev. J.M. DeVries and Rev. Johann Schmidt. The couple made their home on the farm near Latimer and later moved into Hampton in 2002. Arnold and Shirley were blessed with a special daughter Teresa. He was a lifetime member of the Zion Reformed Church in rural Sheffield, where he was baptized on August 7, 1927, and later made profession of faith on June 9, 1946, at the same church. He also served terms as a deacon and elder. Arnold was a member of the Hansen-Have Legion in Latimer for 62 years of service to the Legion. He served his country in the Army during the Korean Conflict from 1952-1954. Arnold enjoyed family gatherings, traveling, camping, fishing trips to Canada and hunting. Left to cherish his memory are his wife Shirley of 64 years, special daughter Teresa (Matthew) Draffen, grandchildren Marcus Draffen and Lucas Draffen, brother-in-law C.S. (Stuart) Riggins, nephews Wayne and Steve Riggins and niece Beverly Mason and other relatives and friends. Arnold is preceded in death by his parents, sister Evelyn Riggins and one sister in infancy. In Lieu of flowers memorial may be given to, Zion Reformed Church, Hampton Senior Center or Hospice.

The family of Arnold Herman Oltmann created this Life Tributes page to make it easy to share your memories.

Send flowers to the Oltmann family.