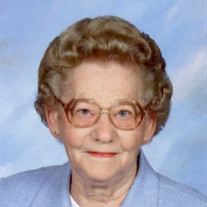 Albertha Berniece Lolling Dietz passed away Saturday, March 24, 2012 at the Franklin General Hospital Nursing Facility in Hampton, Iowa. She was born April 24, 1926, in Butler County, Madison Township, Dumont, Iowa to Ben and Susie (Block) Lolling. Berniece was raised by her mother, Susie and John Hovenga whom she knew as her father after her birth father passed away before she was 2 years old. Berniece attended rural schools and Dumont Consolidated. She married Elmer Nolte in 1944, and had one son, Michael. Berniece was a member of the New Hope United Methodist Church Aredale Center where she was active in the UMW. She lived in Butler County most all her life. Berniece served as church custodian for many years, taught Sunday School for about 30 years, and was also active with Youth and Choir. She also filled in as church accompanist on occasion. Berniece loved music, outdoors, nature, gardening, yardwork, and canning home grown produce from her garden for family, friends, and neighbors. She won many blue ribbons with entries into the Butler Co. Fair of garden produce, flowers, and baked goods. In March of 1979 she married Wayne Dietz at the United Methodist Church in Dumont. In 1998 they moved to Aredale. Berniece and Wayne mowed several lawns, had a huge garden, and did yardwork for several years until Wayne passed away in May 2001. She remained living in Aredale gardening and cleaning various places in and around Aredale including the Aredale Bank and United Methodist Church until she retired in 2010 and moved to Hampton. She is survived by Son, Michael Nolte and wife, Carol of Hampton; Grandson, Keith Nolte and wife, Rayne of Ackley; Grandson, Matthew Nolte and wife, Lauren of Waverly; Granddaughter, Cassandra (Cassie) Nolte of Hampton; Great-Grandson Emerick Nolte of Ackley; Step Family: Daughter, Dianna Roberts and husband (Royce) of Unionville, IA; Daughter, Carol Tolley of Grand Prairie, Texas; Son, David Ogburn of Phoenix, AZ; Son-in-Law, Dale Hergert of Sherrard, IL; Grandchildren, Brian Tolley and wife, LaNell of Plano, TX; Jeramy Hergert and wife, Lynn of Sherrard, IL; Angie Hergert of Aledo, IL; and Great, Grandchildren, David Hergert of Sherrard, IL; Tristan Louton, Trevor Tobias, Tamryn Hergert of Aledo IL. Berniece was preceded in death by her husband, Wayne and parents. . Burial will take place at the Dumont Cemetery in Dumont, Iowa.

The family of Berniece Dietz created this Life Tributes page to make it easy to share your memories.

Send flowers to the Dietz family.