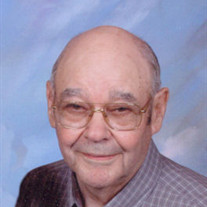 Beryl "Bob" D. Reed, 88, of Dumont, Iowa, passed away April 6, 2011, at the Franklin General Hospital in Hampton, Iowa. He was born July 31, 1922, in Dumont, Iowa, to Harry and Flossie (DeArmoun) Reed. Bob graduated from the Dumont High School. He was united in marriage to Jean Hutchison on April 25, 1944, at the United Bretheran Church in Dumont. Bob farmed, drove a milk truck, worked at the Franklin General Hospital and owned and operated Reed's CafÃ© with his wife Jean. He was a member of the Dumont Saddle Club and the New Hope Parish of the United Methodist Church in Dumont. Bob enjoyed his family, especially his grandchildren and great grandchildren. He had a love for horses and mules and enjoyed riding, breaking and driving them. Bob had many friends that drove horses and mules with him. In his earlier years, he and Jean loved to roller skate and used to skate at the roller rink between Hampton and Iowa Falls. Bob and Jean loved to have coffee with their friends and the coffee pot was always on for a friend to stop by. He was also always willing to help a friend and lend a helping hand when needed. Bob is survived by his wife Jean Reed of Dumont, daughter Laveta (Doug) Pfaltzgraff of Bondurant, daughter Marcia (Lyle) Landers of Greene, son Douglas Reed of Hampton, grandchildren Dawn (Tim) Plimmer of Urbandale, Brad (Laura) Pfaltzgraff of Bondurant, Trace (Heather) Landers of Denver, Thad (Meghan) Landers of Shell Rock, great grandchildren Oliva Griswold, Reed and Drake Pfaltzgraff & Gavin, Tate and Kayden Landers, step great grandchildren Mitch and Jared Plimmer, sister-in-law Ann Reed of Allison and niece Noreen (Warren) Weigmann of Bristow. He was preceded in death by his parents Harry and Flossie, brother Nolan Reed and grandson Travis Landers. Memorials may be directed to Hospice of North Iowa. Burial will take place in the Dumont Cemetery.

The family of Beryl "Bob" D. Reed created this Life Tributes page to make it easy to share your memories.