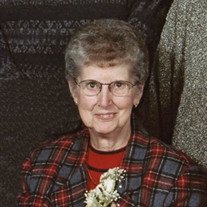 Betty Meyer, 83, of Hampton, passed away Sunday at the Franklin General Hospital Nursing Facility in Hampton, Iowa. Betty Meyer was born February 6, 1930, to Oak and Hattie (Ubben) Lursen in Kesley, Iowa. She went to school in Geneva, Iowa, where she graduated the 8th grade. They moved to Hampton and she worked for a little grocery store and then the 5 and 10 Cent Store on Main Street. She met and married Raymond T. Meyer on November 26, 1950, at the Reverend Beggs home of the Congregational Church of Hampton. Betty was always working but always had time for her family. There was always camping and fishing trips to Minnesota. She worked as a cashier at Jennings Grocery Store, until Ray and Betty bought the Phillips 66 Station that they ran for 8 1/2 years. She also worked as a teller for First National Bank of Hampton and was head cook for 18 years at the Hampton Nursing Home. Ray and Betty decided to open Betty's Cafe in 1983, which they ran for 13 1/2 years. Betty was famous for her homemade food and you never went away hungry. Everyone always raved about the huge portions of Hot Beef, homemade pies and soups. They sold the Cafe in 1996 to a daughter to carry on the tradition so they could retire. Well, that didn't happen! You could never keep Betty still for long, so she worked part-time at the cafe to keep her busy. When the cafe closed in 2002 she worked as a baker for a son and daughter that had Eaton's Cafeteria in Belmond for a year. Ray and Betty had 6 children, Ron (Deb) Meyer of Osceola, Rhonda (Carl) Noelck of Hampton, Shelley (Dale) Dodd of Hampton, Sam (Vicki) Meyer of Belmond, Raynard (Sandee) Meyer of Spencer and Sandy Perez of Hampton. She had 16 grandchildren and 35 great-grandchildren and 2 great-great grandchildren, sister Margaret Smoot of Allison, brother Richard Lursen of Allison and sister in law Mildred Kloetzer of Bradford. She is preceded in death in by her parents Oak and Hattie Lursen, sister Grace Siems, brother-in-law Sweer Siems, brother Fred (Bob) Lursen, sister-in-law Grace Lursen, brother-in-law Linus Smoot, sister-in-law Ruth Ammerman, brother-in-law Jake Ammerman, and brother-in-law Bob Kloetzer. Burial will take place at the Hampton Cemetery

The family of Betty J. Meyer created this Life Tributes page to make it easy to share your memories.

Betty Meyer, 83, of Hampton, passed away Sunday at the Franklin...