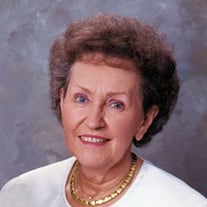 Betty Lou Kruse, 83, of Allison, IA, passed away on Tuesday, September 10, 2013, at the Waverly Municipal Hospital in Waverly, IA. Betty was born on September 9, 1930, in Greene, IA, the daughter of Carl and Rose Hegland Yaw. She graduated from Greene High School in 1948. One of her favorite memories of growing up in Greene was listening to the whistle of the train, the Rock Island Line, as it passed through town. On April 30, 1950, Betty was united in marriage to Charles W. Kruse at St. Peter's Lutheran Church in Greene. The couple made their home on the farm north of Allison for 55 years until they moved into Allison in 2005. Betty was an avid homemaker and she loved to bake. Her children enjoyed coming home from school to homemade bread, donuts, and other goodies. After her children grew up, Betty and Charles continued to show hospitality to others through hosting many missionaries and church speakers and inviting relatives and friends over for meals. The most important part of Betty's life was her relationship with the Lord Jesus Christ, in whom she trusted as her personal Savior in the early 1960's. Betty had a special love for children and established the Open Door Bookstore in Allison in 1973, providing Christian literature and a place to host youth meetings, Good News Clubs and Joy Clubs. Betty was a member of Allison Bible Church where she taught Sunday school, Vacation Bible School and ministered in music. Living family members include her husband, Charles, of Allison; son Dr. Brian Kruse and wife Ann of rural Greene and daughter Linda and husband Pastor Michael Nemmers of Jesup; 7 grandchildren: Stephen Kruse, Marinela Kruse, Rebekah and husband James Boyd, Nathan and wife Susan Nemmers, Rachel Nemmers, David Nemmers and Jonathan Nemmers; 8 great-grandchildren: Makayla, Hope, Gabriel, Rowan and Liam Boyd and Jackson, Madison and Jacinda Nemmers; sister-in-law and husband, Shirley and Bob Hoodjer, Allison, and numerous nieces and nephews. She was preceded in death by her parents, her step father, Archie DeFrance, her sister, Kathryn Kamp, Kathryn's husbands, Doug Duffield, and Louis Kamp, and her grandson, Michael Paul Nemmers. Burial will take place in the Allison Cemetery.

Betty Lou Kruse, 83, of Allison, IA, passed away on Tuesday, September 10, 2013, at the Waverly Municipal Hospital in Waverly, IA. Betty was born on September 9, 1930, in Greene, IA, the daughter of Carl and Rose Hegland Yaw. She graduated... View Obituary & Service Information

The family of Betty Lou Kruse created this Life Tributes page to make it easy to share your memories.

Send flowers to the Kruse family.