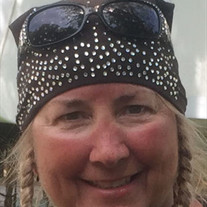 Bonnie Lee Meinders Schwierjohann, 60, of Rockwell, Iowa, passed away Sunday, September 3, 2017, at St. Vincent Hospital in Green Bay, Wisconsin, due to injuries sustained in a motorcycle accident. She was born on March 19, 1957, in Hampton, Iowa, to Robert and Anna (Smidt) Stock. Bonnie graduated from Sheffield-Chapin High School and from Hamilton Business College with an associate of arts degree in Medical Transcription. She was united in marriage to Rick Schwierjohann on September 12, 2010, in Las Vegas, Nevada. Bonnie worked for the United States Post office as a clerk for thirty-one years, most recently working in Rockwell. She volunteered as a EMT in Rockwell, taught BLS at NIACC, and was involved in ABATE of Iowa, Toys for Tots and the Ronald McDonald House in Rochester. Bonnie loved helping others, especially children. She enjoyed motorcycling, traveling all across the United States from coast to coast, as well as feeding and watching birds. Bonnie is survived by her husband Rick Schwierjohann of Rockwell, son Troy of Mason City, daughter Krista (Bradley) Kramer of Eagan, Minnesota, son Tyler of Phoenix, Arizona, grandchildren Jacoby and Avianna Kramer, sister Lavon (Phil) Oleson of Humboldt, brother Roger (Carol) Stock of Sheffield, brother Jerry Stock of Sheffield, brother Gene Stock of Hampton, mother-in-law Norene Schwierjohann of Sheffield, sister-in-law Lori (Dean) Endriss of Hampton, along with many nieces and nephews. She was preceded in death by her parents Robert and Anna, father-in-law Edward Schwierjohann and niece Lindsey Stock. Casual clothes of jeans and Harley-Davidson attire is requested. Motorcycles are welcome. In lieu of flowers, memorial contributions may be sent to Toys for Tots.

Bonnie Lee Meinders Schwierjohann, 60, of Rockwell, Iowa, passed away Sunday, September 3, 2017, at St. Vincent Hospital in Green Bay, Wisconsin, due to injuries sustained in a motorcycle accident. She was born on March 19, 1957, in Hampton,... View Obituary & Service Information

The family of Bonnie Lee Meinders Schwierjohann created this Life Tributes page to make it easy to share your memories.