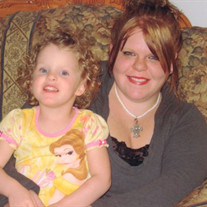 Brianna Joy Weismann, 26, of Boone, formerly of Hampton, passed away Saturday, May 24, 2014, in Boone. She was born on January 7, 1988, in Webster, Texas, to Terry Weismann and Mona (Weismann) Kotenbrink. Brianna graduated from Hampton-Dumont High School in 2006. In May 2007, Brianna's daughter Emilie was born, who was the light of her life. She attended NIACC in Mason City for one and a half years, graduated from La James College of Cosmetology in Mason City in 2011 and was recently enrolled at DMACC in Boone, taking classes for medical assistant and phlebotomy. Brianna also worked at McDonald's in Boone. She was a former girl scout, was part of the high school band, playing flute, and singing in the choir. Brianna enjoyed spending time on Pinterest and also enjoyed baking and cake decorating. She loved her family and especially enjoyed going to all of the family gatherings. One of her most memorable vacations was when she went to Orlando with her family and she got to swim with dolphins. Brianna is survived by her daughter Emilie Weismann of Boone, special friend Ben Abbas of Boone, father Terry Weismann of Marshalltown, mother Mona (Dennis) Kotenbrink of Hampton, grandmother Darlene Bierl of Clarion, grandparents Darwin (Darlene) Kotenbrink of Hampton, half-brother Christopher Weismann of Iowa Falls, half-brother Timothy (Beth) Weismann of Fort Dodge, step-brother Cory (Carli) Kotenbrink of Dumont (with one on the way), along with Cory's children Rachel, Joshua and Kaitlyn Kotenbrink, step-brother Brent (Jennifer) Kotenbrink of Hampton and their children Landon and Blake Kotenbrink, step-sister Crystal Kotenbrink of Iowa Falls and her children Makayla and Dillon Nolte, along with many aunts, uncles, cousins and friends. She was preceded in death by her paternal grandparents Russell and Dorothy Dow, maternal grandfather Donald Bierl and maternal great-grandmother Pauline Bierl-Hamilton. Burial will take place in the Hampton Cemetery.

Brianna Joy Weismann, 26, of Boone, formerly of Hampton, passed away Saturday, May 24, 2014, in Boone. She was born on January 7, 1988, in Webster, Texas, to Terry Weismann and Mona (Weismann) Kotenbrink. Brianna graduated from Hampton-Dumont... View Obituary & Service Information

The family of Brianna Joy Weismann created this Life Tributes page to make it easy to share your memories.

Send flowers to the Weismann family.