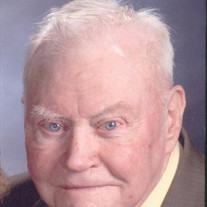 Byron L. Bales, 88, of Hampton, Iowa, passed away June 24, 2011, at the Franklin General Hospital in Hampton, Iowa. He was born February 22, 1923, in Dimmit, Texas, to Ansel L. and Alva F. (Metcalf) Bales. Byron graduated from the Hansell School in 1940. He served his Country in the United States Navy and Army. Byron married Elizabeth Mennenga on January 12, 1947, in Shell Rock, Iowa. He was a farmer and later in his life he became a carpenter. Byron was a member of the Trinity Lutheran Church in Hampton, was a member of Disabled Veterans of America, the Farm Bureau and was also a 4-H Leader. He was part of the Hampton Community for his entire life. Byron enjoyed fishing, going to casinos, was an avid Minnesota Twins Fan and enjoyed woodworking. He was proud of the many homes he built in the area and most of all his three children. Byron is survived by his daughter Carol (George) Gartrell of Otterburne, Manitoba, Canada, daughter Nancy Lee of Kauai, Hawaii, son Gary (Kristin) Bales of Gig Harbor, Washington, four grandchildren Jenni Adams, Jill Adams, Daniel Bales and Sarah Bales and one great grandson Sawyer Titheradge. He was preceded in death by his parents, wife Elizabeth and his daughter Mary Louise Bales. Burial will be in the Hampton Cemetery. There will be no visitation.

The family of Byron L. Bales created this Life Tributes page to make it easy to share your memories.

Send flowers to the Bales family.