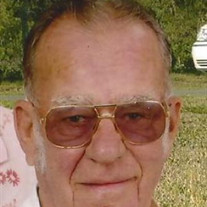 Carl Meade, 80, of Hampton, passed away Wednesday, May 23, 2012 at his home in Hampton. Visitation will be held at Sietsema-Vogel Funeral Home in Hampton on Thursday, May 24 from 5:00-7:00 PM. An additional visitation will be held at Pedrick's Funeral Home in Keosauqua, Iowa on Saturday, May 26, 2012 at 1:30 PM with the funeral to follow at 2:30 PM. Carl was born August 12, 1931 in Upton, Missouri to John and Blanche Meade. He attended school at Cantril, Iowa. He served in the Iowa National Guard from 1948-1952, and the United States Army from 1952-1954. He was married to Mary Lou Shotten on July 12, 1952. Carl and Mary Lou had two sons, John of Cedar Rapids, Iowa and Jim (Deb) of Hampton, Iowa. Following his military service, Carl worked as a lead lineman for Dairyland Power Company for 35 years. Carl retired in 1992. Following their retirements, Carl and Mary Lou became full-time RVers. They traveled around the United States spending winters in Arizona and Florida. They moved to Hampton,Iowa in 2006 to be closer to family. Carl was a volunteer fireman and served as Assistant Fire Chief in Postville, Iowa for 25 years. He was active as a Boy Scout leader. Carl loved the outdoors, spring time mushroom hunting, camping, woodworking, hunting, and spending time with his family. He was preceded in death by his parents; brother, Charles Meade; his sister, Betty Sears; a grandson, Patrick Meade; and nephews Thomas Meade, Larry Beggs, and Monty Shotten. He is survived by his wife of nearly 60 years, Mary Lou; two sons, John and Jim (Deb); and four grandchildren, Jason, Jake, Annie, and Sean; and one sister, Elizabeth Sedore; as well as other extended family members and friends. Cards and memorials may be left at either funeral home or mailed to Mary Meade. Memorials may be directed to Hospice of North Iowa or the Maple Grove Cemetery in Cantril, Iowa.

The family of Carl Dean Meade created this Life Tributes page to make it easy to share your memories.

Send flowers to the Meade family.