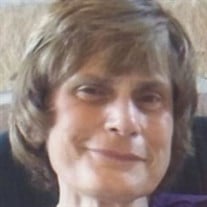 Carol A. Skarr, 62, of Mason City, Iowa, formerly of Dumont, Iowa, passed away Tuesday, November 13, 2012, at Mercy Medical Center North Iowa in Mason City, Iowa. She was born on June 6, 1950, in Franklin County, Iowa, to John and Anita (Meyer) Freeks. Carol graduated from CAL High School in Latimer and Hamilton's Business College in Mason City. She was united in marriage to Jay Skarr on June 26, 1970 in Latimer. Carol was a strong woman who no matter what always kept herself busy; there was always work to do. She would clean, garden, work on store paperwork and bills, walk and bike around Dumont and never left a bottle or can lay on the ground. "A nickel is a nickel," you would always hear her say. She was also probably the only person in Dumont to hang clothes out to dry when there was still snow on the ground. Carol was a member of the New Hope Parish of the United Methodist Church in Dumont and was affiliated with Our Savior's Lutheran Church in Mason City. She owned and operated J & C Grocery with her husband Jay and spent most of her life working there in Dumont, although when she was in the store it should have been called C & J Grocery. From morning to night, she ran the register, oversaw the store, greeted everyone and knew everyone by name. She was a bright and happy sight to see. Carol was a strong woman who wouldn't give up for nothing. Through many illnesses, injuies, broken bones and cancers, she never gave up and never stopped. She had work to do and nothing was going to stop her. Now she can finally rest without any pain knowing she truly touched many lives. Carol is survived by her husband Jay Skarr of Mason City, son Jason (Robyn Hay) Skarr of Mason City, son Jeremy Skarr of Las Vegas, Nevada, daughter Julie (Jesse) Boelsen of Mason City, grandson Braden Boelsen of Mason City, sister Betty Wessels of Belmond, sister-in-law Kay Studer of Des Moines and several nieces and nephews. She was preceded in death by her parents John and Anita. Burial will be held at a later date.

The family of Carol A. Skarr created this Life Tributes page to make it easy to share your memories.

Send flowers to the A. Skarr family.