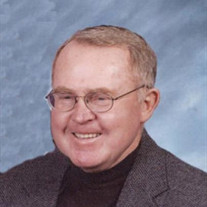 Carroll Vern Rugland, 76, of Hampton, Iowa passed away August 16, 2011, at the Franklin General Hospital Nursing Facility in Hampton, Iowa. He was born July 19, 1935 in St. Olaf, Iowa, to Vernon and Cora (Benson)Rugland. Carroll graduated in 1957 from Luther College in Decorah, Iowa. He married Dorothea Ellen Thompson on June 5, 1960 in Davenport, Iowa. Carroll began his teaching and coaching career at Bennett High School, where he taught from 1957-1963. While there, he led both girls' basketball and softball teams to the state tournament. He moved to Montezuma in 1963, where his girls' basketball teams won the state tournament in 1969 and 1970. He amassed 89 consecutive victories over the 1969-1971 seasons, a record that stands today. His record setting streak ended in a 103-104 overtime loss in the 1971 state quarterfinals. While in Montezuma, Carroll also coached boys' baseball and started the high school golf program. Carroll moved to Hampton in 1973 where he continued teaching and coaching, leading his girls' basketball teams to seven more state tournament appearances. His 1992 team accomplished a 2nd place finish in the state tourney. While in Hampton, Carroll also coached cross country and girls' track. He retired from teaching and coaching in 1998, ending his career as the 4th winningest coach in Iowa girls' basketball history, with a 735-245 win/loss record over 41 seasons. During that time, he received numerous awards, including Iowa Coach of the Year and the National High School Coach of the Year in 1986. He was also inducted into the Iowa Girls' Coaches Association Hall of Fame and served for many years on the board of the Iowa Girls' High School Athletic Union. Carroll was an active member of St. Paul Lutheran Church in Hampton, where he served on the church council. He was a life-long fan of the New York Yankees and had a tremendous knowledge of baseball history and trivia. Carroll is survived by his wife, Dorothea Rugland of Hampton, daughter, Karyn Rugland Haydock, of Montgomery, New York, son, Kris Rugland of Mt. Horeb, Wisconsin, grandchildren, Ruby and Cora Rugland of Mt. Horeb, Wisconsin, and a sister, Helen Rugland Bemer, of Seattle, Washington. Carroll was preceded in death by his parents. IN LIEU OF FLOWERS MEMORIALS MAY BE DIRECTED TO THE FAMILY. Burial will be at a later date.

The family of Carroll Vern Rugland created this Life Tributes page to make it easy to share your memories.

Send flowers to the Rugland family.