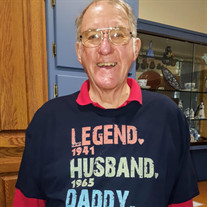 Charles “Chuck” Akers, 81, of Hampton, passed away Thursday, March 24, 2022, at Franklin General Hospital in Hampton. Funeral services will be held at 10:30 a.m., Monday, March 28, 2022, at Trinity Lutheran Church in Hampton, with burial in the Hampton Cemetery. Visitation will be held Sunday, March 27, 2022, from 3:00 p.m. to 6:00 p.m., at Trinity Lutheran Church in Hampton. Charles “Chuck” Emerson Akers, son of EJ and Anna Akers, was born March 6, 1941, in Hampton, Iowa. He lived most of his life in Hampton. In 1959 he graduated from Hampton Community High School and went on to study Animal Husbandry at Iowa State University. In 1964 he was drafted by the United States Army where he served until 1966. While going through basic training at Fort Sill, Oklahoma, Chuck was able to travel north to visit his fiancé and on August 7, 1965, he married Sharon (Schomer) in her hometown of Omaha, Nebraska. Following his service in Vietnam he returned to Iowa State University and graduated in 1968. After graduating, he and Sharon returned to Hampton to join his father on the family farm. While living there they were blessed with three sons: Eric, Adam, and Joel. After 20 years of farming, Chuck became a Farm Bureau insurance agent. He worked for Farm Bureau for 25 years, advising clients and making friends until he retired in 2009. Throughout his life, Chuck was an active member of the community. In 1959 Chuck was a member of the Franklin County 4-H livestock judging team that took first place at the international livestock judging contest in Chicago, Illinois. His favorite pastimes were attending his sons’ numerous activities, traveling with his wife, and spending time with friends. Chuck was an active member of Trinity Lutheran Church, Franklin County Fair Board, Hampton Community Housing Corporation, and Hampton Community Christian Daycare board. He also was a 4-H leader, and served on the Franklin County Extension Council, was a member of the American Legion and the Iowa Pork Producers Association. Whether you knew him as a friend, colleague, agent, dad, husband, grandpa, bumpa, or neighbor, Chuck was always open and full of advice. He made friends wherever he went, sharing stories about his life and listening intently to yours. In his free time, he shared his love of Iowa State with his friends and family watching Iowa State football games, wrestling meets, or pretty much any Cyclone event. He cared deeply for his family and wanted to know about yours. A smile was never far from his lips, whether grilling for Sunday dinner or sitting down for a game of 500 or a hand of bridge. Chuck taught his boys to have a strong belief in our savior Jesus Christ, to love our family, work hard, and to be a leader in the community. He will be missed by all. Chuck is survived by his wife, Sharon; his sisters Barbara (Gary) Kline (Bismarck, North Dakota) and Marcia (Roger) Dudden (Dike, Iowa); his sons Eric (Gina) Akers (Alexandria, Virginia), Adam (Deb) Akers (Hampton, Iowa), and Joel (Jean) Akers (Van Meter, Iowa); grandchildren Chelsea (Bryan) Loftus (Altoona, Iowa), Isabell Akers (Pleasant Hill, Iowa), Nick Davis (Ames, Iowa), Samantha Akers (Van Meter, Iowa), and Cole Akers (Alexandria, Virginia); and great-grandchildren Garrett and Danica Loftus, as well as numerous cousins, nieces, and nephews. He was preceded in death by his parents. In lieu of flowers, memorial contributions can be sent to: Franklin County Fair Foundation, Hampton Community Christian Daycare, or the Trinity Lutheran Vicar Fund. Counsell Woodley Funeral Home of Hampton is caring for Chuck and his family.

The family of Charles E. "Chuck" Akers created this Life Tributes page to make it easy to share your memories.

Send flowers to the Akers family.