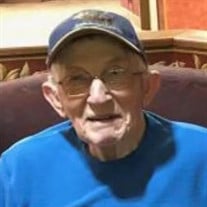 Charles G. Marzen, “Charlie”, 93, of rural Marble Rock died Sunday, March 6, 2022 at Nora Springs Care Center. Visitation will be held from 4:30 p.m. to 7:30 p.m., with a Rosary Service at 7:00 p.m., Tuesday, March 8, 2022, at ST. PATS in Dougherty. A Mass of Christian Burial will be held at 10:30 a.m., Wednesday, March 9, 2022, at St. Mary Catholic Church in Greene, with an hour of visitation prior to the Mass. Burial will take place in the St. Patrick's Catholic Cemetery in Dougherty. The Counsell Woodley Funeral Home of Greene is caring for Charles and his family. Charles was born May 9, 1928 in Greene, Iowa to Louis and Marguerite Marzen. He attended the country school until the 8th grade and graduated in 1946 from St. Patrick’s Catholic High School in Dougherty. He married Joyce Fern Anderegg on June 22, 1948 at St. Patrick’s in Dougherty. They made their home on a farm near Marble Rock for over 64 years. He resided for the last 5 years at the Nora Springs Care Center where he was well loved and known for his whistling and cheerful disposition. Charles raised cattle and farmed well into his 80’s before retiring. Along with farming, Charles also worked at White Farm Equipment Co. in Charles City for ten years. Charles led an active and interesting life. He and his wife Joyce raised six children on their farm sharing their love of church, family, friends, gardening, hunting, cooking, winemaking and travel. Some of his travels included Pennsylvania, Montana, Wyoming and he especially loved Alaska. Bowling was a big part of his life for many years with Charles bowling in a mixed league alongside Joyce and also in a men's league. As a recipient of the Floyd County Conservation Award, Charles always kept conservation in mind planting trees and food plots. He was an avid hunter of pheasants, turkeys, deer and other wildlife. After their children were grown, he and Joyce opened their home as a bed and breakfast for pheasant hunters that would stay year after year, becoming good friends of the couple. He will be greatly missed by his five children: Stephen [Louise] Marzen, of Greene, IA, Theresa [Jim] Schmitt of Whittemore, IA, Judy [Bill] Vorhes of Marble Rock, IA, Andrea [Bill] Wentink of Mason City, IA, and Vincent [Melissa] Marzen of Robins, IA; eighteen grandchildren, forty-eight great-grandchildren and two great-great-grandchildren; brother Max Marzen of Rochester, MN; sisters Maxine Zea of Rockwell, Iowa, Joan Nettleton, Charlene Roderick, and Peggy Marzen all of Greene, Iowa; daughter-in-law MaryLou Shaw of Marble Rock; and many nieces and nephews. He was preceded in death by his wife, Joyce in 2009 and son, Gregory in 1999; His parents: Louis and Marguerite, as well as his brothers Louis Jr. and Paul. The family wishes to express their sincerest thanks and gratitude to Nora Springs Care Center for their excellent and loving care for Charles, as well as his loving friend and companion Carol Albaugh. In lieu of flowers the family requests donations be made to Pheasants Forever, Floyd County Conservation Society, “ST PATS” [420 East Patrick Street, Dougherty, Iowa 50433] or just go plant a tree.

The family of Charles G. Marzen created this Life Tributes page to make it easy to share your memories.

Send flowers to the Marzen family.