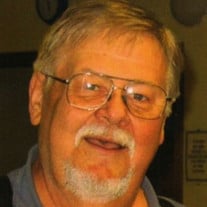 Charles Wray Meyer was born Flag Day, June 14, 1943 on the family farm near Bradford, Iowa. He was the second of three sons born to Lambert and Alice (Duit) Meyer. On February 21, 2011, he passed into the loving arms of his Savior in Zephyrhills, Florida. Charles was baptized and confirmed at St. Peter's Evangelical and Reformed Church (St. Peter's United Church of Christ) near Geneva, Iowa. Chuck (Charlie) graduated from Iowa Falls High School in 1961. Soon thereafter he joined the United States Navy. A portion of his tour of duty included time in Vietnam. He served for six years, being honorably discharged in 1968. Upon his release he attended Ellsworth Junior College in Iowa Falls. He soon switched to barber college. After obtaining his license her barbered for almost 10 years in Iowa Falls and Shenandoah, Iowa. Chuck also attained his commercial driver's license and began a 10 year career as an over-the-road driver. It was during this time that he met the love of his life, Kathleen Mancuso, whom he married on October 10, 1980 in Plant City, Florida. For almost 5 years Chuck and Kat lived in Fort Dodge and Ankeny, Iowa. In 2008 Chuck began a fight against cancer. In spite of increasingly difficult quality-of-life circumstances he never lost his joy, his love of life and people, and trust in his Redeemer and Savior, Jesus Christ. Chuck was an active member of the Berwick Congregational Church, Berwick, Iowa and Hope Church in Tampa, Florida. He especially loved to worship the Lord in music. He loved to sing, often singing with his brothers. Chuck is survived by his wife Kathleen, (Kat): daughter Rhonda (husband Simon, sons Daniel and Dominic); son Joe; brothers, Keith (wife Linda) and Dennis (wife JoAnna) and their families. He was preceded in death by his parents, Lambert and Alice. Chuck is also survived by an endless list of relatives, friends, shipmates, co-workers and acquaintances who knew and loved him and who had been touched by his heaven-sent gift of love.

Charles Wray Meyer was born Flag Day, June 14, 1943 on the family farm near Bradford, Iowa. He was the second of three sons born to Lambert and Alice (Duit) Meyer. On February 21, 2011, he passed into the loving arms of his Savior in Zephyrhills,... View Obituary & Service Information

The family of Charles Wray Meyer created this Life Tributes page to make it easy to share your memories.

Send flowers to the Meyer family.