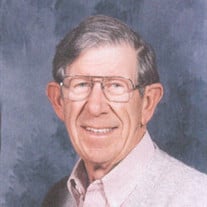 Charles Marshall "Mose" Mosher, 90, of Allison, Iowa, passed away March 14, 2011, at the Rehabilitation Center of Allison in Allison, Iowa. He was born August 1, 1920, in Parkersburg, Iowa, to Hugh L. and Clara Agnes (Yost) Mosher. Charles graduated from Parkersburg High School and then attended Iowa State College and Wartburg College. He served his country in the United States Navy in the South Pacific during World War II. Charles was united in marriage to Viola M. Schrage on June 23, 1946, in Allison, Iowa. Mose was a parts manager for Allan Chevrolet Garage, was a school bus driver for the Allison-Bristow school district for over 20 years, and he owned and operated Mosher Standard Station in Allison as well as a farm products distributorship. He was a member of the Allison Amvets and the American Legion. He played taps for Amvets for over 60 years. He played trumpet in several bands, including the United States Navy Band. Charles was a member of the St. James Lutheran Church in Allison where he was active on the church council. As an active parent Mose participated and encouraged his children in many music and recreational activities and attended years of his children's athletic events. He volunteered for the Allison Ambulance crew. He enjoyed fishing, pheasant hunting, bowling and golf. Mose also enjoyed traveling with his wife Vi and sister Merna to many places around the world after his children were grown. Charles is survived by his daughter Marcia (William) Rovani of Mt. Prospect, Illinois, daughter Ellen (Scott) Hanson of Hayward, Wisconsin and Port Charlotte, Florida, daughter Marilyn (Jeff) Bodine of Minneapolis, Minnesota, daughter Barbara Mosher of Big Lake, Minnesota, son Charles H. (Linda) Mosher of Allison, daughter Annie Mosher of Bloomington, Minnesota, sister Merna McDonald of Downers Grove, Illinois, ten grandchildren and one great grandchild. He was preceded in death by his parents Hugh and Clara and his wife Viola. Military services provided by the Allison Amvets. Burial will take place in the Allison Cemetery. In leu of flowers, memorials may be directed to the family for future disbursement.

The family of Charles Marshall "Mose" Mosher created this Life Tributes page to make it easy to share your memories.