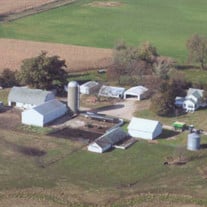 Dale Vincent Eisentrager, age 84, of Bristow, Iowa. Dale was transferred from St. Mary's Hospital in Rochester on March 2, 2010, to the Allison Rehabilitation Center where he passed away on March 3, 2010, after a 13 year battle with cancer. Dale was born October 2, 1925, on the family farm in rural Dumont, Iowa, to Frank and Lela (Truax) Eisentrager. He was educated in a country school in Butler County. He worked on the family farm with his dad before going to serve his Country in the United States Army. He served from 1954 to 1956. After his discharge, he returned to the Dumont area where Dale continued working with his dad. He also worked as a carpenter and a hired farmhand. On June 11, 1960, Dale was united in marriage to Mary Ann Wendt in Dumont. Dale and Mary Ann lived on a farm south of Bristow all their married life. Together they raised sheep, hogs and cattle. Dale formed a partnership with his brother Richard to farm the family farm along with Dale's. Later in life, Dale enjoyed woodworking and doing craftwork with his wife. If we ever needed to find him, we knew to look in the toolshed. He also loved spending time with his grandchildren and giving them rides on the tractor. Dale was a quiet, hard working man with a love for his family and a passion for farming. He was a member of the New Hope Parish of the United Methodist Church in Dumont. He is survived by his wife Mary Ann Eisentrager of Bristow, son Frank Eisentrager & fiancee, Brenda Ballard of Greene, daughter Tammy & husband Brent Eilers of Danville, Indiana, son Doug & wife Deb Eisentrager of Dumont, daughter Dee & husband Darol Roth of Waverly, sister Phyllis & husband Harold Harms of Dumont, brother Richard & wife Esther Eisentrager of Dumont, sister Beverly & husband Henry Folken of Parkersburg, sister Sharon & husband Nathan Eilers of Hampton, brother-in-law Leroy Cassmann of Hampton, grandchildren; Josh & wife Janae Eisentrager, Jeremy Eisentrager & fiancee Allyson Hutzel, Kayla & Janae Eilers, Danielle & David Eisentrager, Matthew & Daniel Roth. Dale was preceded in death by his parents, two sisters Lucille & Dorothy and two brothers Glenn & Earl. The family wishes to thank everyone for their acts of kindness, words of encouragement and many prayers.

Dale Vincent Eisentrager, age 84, of Bristow, Iowa. Dale was transferred from St. Mary's Hospital in Rochester on March 2, 2010, to the Allison Rehabilitation Center where he passed away on March 3, 2010, after a 13 year battle with cancer.... View Obituary & Service Information

The family of Dale Vincent Eisentrager created this Life Tributes page to make it easy to share your memories.

Send flowers to the Eisentrager family.