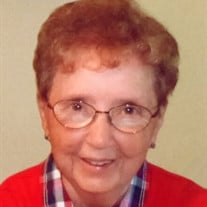 Darlene Ann Paulus Kotenbrink, 81, of Hampton, Iowa, passed away Thursday, October 19, 2017, at Franklin General Hospital in Hampton. She was born on July 12, 1936, in Dougherty, Iowa, to Edward and Goldie (Vestal) Paulus. Darlene graduated from Geneva High School. She was united in marriage to Darwin Harold Kotenbrink on April 28, 1955, at the Little Brown Church in Nashua. Darlene worked as a telephone operator, in a chiropractic office and a bank. She was a member of the Geneva Easy Going Club and was a faithful member of the Faith Baptist Church in Hampton. Darlene enjoyed reading her Bible and spending time with her family, as well as knitting, crocheting, playing cards, singing, watching musicals and old movies and traveling in her younger years. In the 1970's, she helped revive the Geneva Bean Day. Darlene enjoyed helping people in need and made the BEST chocolate cake. Darlene is survived by her husband of sixty-one years, Darwin of Hampton, son Dennis and wife Mona of Hampton, daughter Debbie and husband Jay of Guttenberg, daughter Dawn and husband Jon of Austin, Texas, twelve grandchildren, fourteen great-grandchildren, siblings Doris Hanna, Rose Paulus, Leo Paulus and Frank Paulus, as well as numerous nieces and nephews. She was preceded in death by her parents Edward and Goldie and her granddaughter Brianna Weismann.

The family of Darlene Ann Paulus Kotenbrink created this Life Tributes page to make it easy to share your memories.