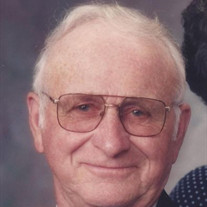 Darwin G. Noelting, 89, of Dumont, Iowa, passed away Friday, May 18, 2012, at his home in Dumont, Iowa. He was born April 23, 1923, in Dumont, Iowa to Leslie and Esther (McKinney) Noelting. Darwin graduated from Dumont High School in 1940. He was united in marriage to Phyllis Zimmerman on June 20, 1946 in Dumont, Iowa. Darwin spent his career farming, but always found time for carpentry. He could build anything and fix anything. He was a member of the New Hope Parish of the United Methodist Church in Dumont, Iowa. Darwin was also on several boards and was active in the community. He served on the Dumont Clinic Board for 33 years, being honored with a plaque for years of service. He served on the Aredale and Dumont School Board for 21 years, and was a past president as well. Darwin was a member of the Dumont Coop Elevator Board for several years and served as Chairman and Trustee of the Methodist Church at various times. He loved to bowl and was a past member of the Dumont Bowling League. He was also a past member of the Dumont Lions Club. Darwin always had time to volunteer in his community, from delivering Meals on Wheels to repairing the American Legion roof and lending his skills to help build the Dumont Fire Station. In the 1940s, Darwin joined the Farm Bureau, being a member for years. He enjoyed farming, traveling, woodworking and especially spending time with his family. His family was very important to him. Darwin treasured his time with his children and grand children and was so proud of each one. Darwin is survived by his wife Phyllis of Dumont, daughter Donice Raisch of Norwalk, grandchildren Matthew Raisch of Waynesville, North Carolina, Ryan Raisch of Kansas City, Missouri, Jonathan (Courtney) Noelting of Dumont, Joel (Kayla) Noelting of Aredale, Rachel (Toby) Noelting of Ames and Samuel Noelting of Aredale, sister-in-law Lois Johnson of Hampton, niece Pamela Rusinack of Sheffield, nephews Mark Johnson of Aredale and Kent Johnson of St. Paul. He is preceded in death by his parents, son Blair and brother Eldon. Burial at the Dumont Cemetery in Dumont, Iowa

The family of Darwin G. Noelting created this Life Tributes page to make it easy to share your memories.

Send flowers to the Noelting family.