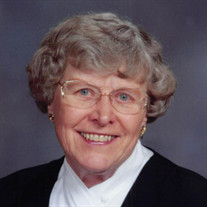 Delores Bender, 91, of Hampton, Iowa, passed away Wednesday, February 2, 2022, at Franklin Country View Nursing Facility in Hampton. Delores Irene Muhlenbruck was born on July 22, 1930, in Latimer, Iowa, the daughter of Harry and Malinda (Plagge) Muhlenbruck. She was baptized and confirmed at Immanuel Evangelical and Reformed Church, Marion Center, rural Latimer. Her formal education was completed in 1948 when she graduated from Latimer High School. On September 7, 1952, she was united in marriage to Robert L. “Bob” Bender. To this union two children were born, Richard Dean and Mary Ann. They lived their entire married life in Hampton, until his death in 1990. In addition to being a wife and homemaker, Delores worked as superintendent secretary for Latimer school district, was deputy in the Franklin County Treasurer’s and Auditor’s offices, worked in the Franklin County ASC office, and was superintendent secretary for the Hampton Community School District until she retired on June 30, 1993. Delores was an active member of the Hampton United Methodist Church serving on the Administration Council and as a member of several committees. As a member of the United Methodist Women (UMW), she served as treasurer, was a Leah Circle member and worked as co-chairperson of the UMW service groups. She was also a member of the Chancel Choir. Delores loved her family and friends, enjoyed musical performances, concerts, stage shows, and especially appreciated church organ music and recitals. Some of her hobbies included golf, playing bridge, gardening, knitting, and working on jigsaw and crossword puzzles. Those left to cherish Delores’ memory include her son, Richard (Linda) Bender of Anchorage, Alaska; daughter, Mary Ann Bender of Urbandale; granddaughter, Katie Bender (Erik Anderson) of Anchorage; brother, Milo (Kay) Muhlenbruck of Greene; as well as several nieces and nephews. Delores was preceded in death by her parents, Harry and Malinda; husband, Bob; sisters, Darleen Muhlenbruck and Deone Muhlenbruck Schulz Deam; brothers-in-law Ralph (Rhoda) Bender and Doug (Shirley) Bender; and sister-in-law Barbara Coe. A graveside service will be held at 2:30 p.m., Monday, February 7, 2022, at the Hampton Cemetery. A public visitation and memorial service will be held later this year. Counsell Woodley Funeral Home of Hampton is caring for Delores and her family. In lieu of flowers, memorial contributions may be given in memory of Delores to Franklin General Hospital Foundation, Hampton; Friends of the Arts at St. John's (Lutheran Church), Des Moines, IA; or Central Lutheran Church, Anchorage, AK.

The family of Delores Bender created this Life Tributes page to make it easy to share your memories.

Send flowers to the Bender family.