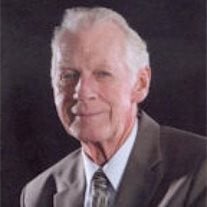 Dennis E. Smit, 73, of Hampton passed away peacefully in his home surrounded by family, on Thursday, December 29, 2011. He was born on May 24, 1938 near Chapin, Iowa, to Dick and Ettie (Janssen) Smit. Dennis graduated from Chapin High School in 1956. He then served 5 years in the United States Air Force. He was married to Dora Sue (Weidemann) Smit on June 2, 1961 and they made their home in Hampton, Iowa for the next 50 years. They were blessed with three daughters, Cindy, Lisa and Denise. Dennis worked as a carpenter until starting his own business, Smit Construction, in 1978. He was the builder of over 50 fine homes in Hampton and the surrounding area until his retirement in 2007. Dennis could often be found tinkering in his wood shop, where he worked on special projects for loved ones and his community. He also enjoyed relaxing with books, cooking, gardening, fishing, and in recent years, helping his son-in-law Kevin with farming. Dennis's favorite place in the world to be was his cabin home on Lake Napoleon in northern Minnesota. He spent many memorable times there with his wife, family and friends. Dennis had a strong faith in God and was a member of Zion Reformed Church in Sheffield, Iowa. He will be greatly missed by his wife Sue Smit, his children Cindy Mollenbeck, (Kevin), Lisa McDonough, (Scott) and Denise Smit (Bill Hallquist); his grandchildren Jesse Mollenbeck, Tyson Mollenbeck (Raine), Halie Mollenbeck, Mae McDonough, Walter McDonough and Ruby McDonough; his sisters Mildred Wenzel (George) and Esther DeVries (Alvin); and many nieces, nephews, relatives and friends. He was preceded in death by his parents, his step mother Bessie Smit, his sister Gertrude Stadtlander and his brother Bill Smit. Burial will take place in the Zion Reformed Church Cemetery in Rural Sheffield, Iowa.

Dennis E. Smit, 73, of Hampton passed away peacefully in his home surrounded by family, on Thursday, December 29, 2011. He was born on May 24, 1938 near Chapin, Iowa, to Dick and Ettie (Janssen) Smit. Dennis graduated from Chapin High School... View Obituary & Service Information

The family of Dennis E. Smit created this Life Tributes page to make it easy to share your memories.

Dennis E. Smit, 73, of Hampton passed away peacefully in his...

Send flowers to the Smit family.