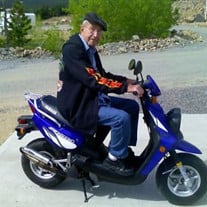 Dick Allen Baker, 90, of Tulsa Oklahoma, formerly of Hampton, Iowa, passed away Sunday (March 4, 2012) at the home of his daughter Melinda Sobel in Tulsa. Funeral services will be 10:00 A.M., Friday at the Sietsema-Vogel Funeral Home in Hampton with burial in the Hampton Cemetery. Visitation will be Thursday from 4-7 P.M., at the Sietsema-Vogel Funeral Home in Hampton. Richard (Dick) Allen Baker, 90, of Tulsa, Oklahoma, passed away Sunday (March 4, 2012) . Dick was born on September 12, 1921 in Belmond to Guy and Mildred (Zook) Baker. He attended the Belmond school system and graduated from high school in 1939. Upon graduation he continued to work on the family farm and help with the Baker Dairy run by his father. He finally proposed to his one true love, Elaine Pletsch, and they were married August 3, 1941 at St. John Lutheran church in Belmond becoming partners for life. They spent their first 20 years together farming and custom corn shelling north of Alexander and raising their three children. In 1963, he made the first of several major career changes by giving up farming and moving his family to Hampton where he started Baker Chrysler, Plymouth and Dodge automobile dealership. Although the auto business was something he loved doing, it was just not as profitable as he had hoped and in 1968 he made the decision to close and make another career change. He attended the Iowa Police Academy and became a police officer for the city of Hampton. It was here he was able to achieve his "15 minutes" of fame when he made the January issue of Esquire magazine when he wrote himself a ticket for "failure to yield the right of way" when his police cruiser crashed into another vehicle at an intersection. Dick was a great cop, but Mindy and Dave (his children) could not get by with anything in the "small" town of Hampton. After his kids graduated, the challenge of being a police officer left him and he decided to make another career change to work for Krause Oil where among other things he learned about snowmobiles with Jack Kangley. In 1977 he familiarized himself with the meter business and become an independent contractor for Midwest Meter Company of Hampton. He remained at this until retiring in 1982 and began to pursue his love of snowmobiles and motor homes/camping. Elaine finally retired in 1987 and they began their adventure of traveling around the country visiting family and friends. Dick is survived by his son Kirk and his wife Michele Baker of St George, Utah, daughter Melinda and husband Jordan Sobel of Tulsa, Oklahoma, son Dave Baker of Council Bluffs, sister Ruth Erickson of Belmond and six grandchildren Bret and wife Gena Baker, Brian Baker, Jared and wife Becky Baker, Jodi and husband Kevin Mohr, Traci and husband Ben McLaughlin, Erin Sobel and 13 great-grandchildren. Dick was preceded in death by his wife Elaine and his parents. Burial will be in the Hampton Cemetery.

Dick Allen Baker, 90, of Tulsa Oklahoma, formerly of Hampton, Iowa, passed away Sunday (March 4, 2012) at the home of his daughter Melinda Sobel in Tulsa. Funeral services will be 10:00 A.M., Friday at the Sietsema-Vogel Funeral Home in Hampton... View Obituary & Service Information

The family of Dick Baker created this Life Tributes page to make it easy to share your memories.

Send flowers to the Baker family.