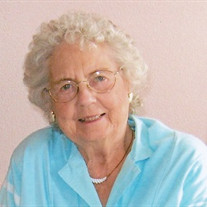 Genevieve (Dilly) Ziegler, 92, of Sheffield, formerly of Hampton passed away April 29, 2014, at the Sheffield Care Center in Sheffield, Iowa. Genevieve Engstrom was born in Corwith, IA to Vivian and Otto Engstrom in 1921. Genevieve grew up on a farm near Humboldt, Iowa. She graduated from Humboldt High School in 1938. After attending Drake University, Genevieve transferred to Iowa State Teachers College in Cedar Falls where she graduated with a degree in business education. During WWII Genevieve taught at the American Institute of Business in Des Moines while she waited for Kenneth Dilly to return from the war. In June of 1946 Genevieve and Kenneth were married in Humboldt, Iowa. For the next 3 years they were high school teachers in Humboldt. While Kenneth and Genevieve were living in Humboldt, their first child, Peggy, was born. They also had a second daughter, Donna, and a son, Kevin. In 1955 the family moved to Hampton, IA where Genevieve lived most of the rest of her life. In Hampton, Genevieve was very active in her community. She was a member of the First United Methodist Church, PEO, AAUW, and various bridge clubs. She served as a 4-H leader and substitute teacher at the high school. Gen supported the schools by attending sports, theater, and music programs at the high school until she was in her 80's. She volunteered at her church, in the elementary schools, and with Meals on Wheels. After Kenneth Dilly died in 1976, Genevieve worked at the Hampton Farm Bureau office, and she was a very dedicated care-giver for her mother and mother-in-law. On December 26th, 1981, Genevieve married Ray Ziegler. They were blessed with over 30 years of marriage. During these years they enjoyed spending summers at Clear Lake and traveling to visit Ray's four children and Gen's three children. Genevieve and Ray became wonderful grandparents and great-grandparents. In August of 2011, Genevieve and Ray moved to Deerfield Place, an assisted-living facility in Sheffield, IA. By April of 2012, Genevieve needed more care and support so she moved to the Sheffield Care Center. During her stay at the Sheffield Care Center, Genevieve was blessed to have Ray close by to care for her and read books to her. Genevieve is survived by her loving husband, Ray Ziegler, her three children Peggy Sears, Donna (Rick) Smith, Kevin (Roxanne) Dilly, Ray's four children Ann (Jim) Huck, Kenton (Bonnie) Ziegler, Jane (Erich) Lear, and Julie (Tom McCarty) Ziegler, sister Ardis (Don) Dyvig of Humboldt, fourteen grandchildren, and numerous great-grandchildren and great great grandchildren. She was preceded in death by her parents, husband Kenneth and sister Lana. She was deeply loved and will be missed. Memorials may be sent to the Hampton Public Library, 4 Federal St. South, Hampton, Iowa 50441.

Genevieve (Dilly) Ziegler, 92, of Sheffield, formerly of Hampton passed away April 29, 2014, at the Sheffield Care Center in Sheffield, Iowa. Genevieve Engstrom was born in Corwith, IA to Vivian and Otto Engstrom in 1921. Genevieve grew up... View Obituary & Service Information

The family of Genevieve (Dilly) Ziegler created this Life Tributes page to make it easy to share your memories.

Send flowers to the Ziegler family.