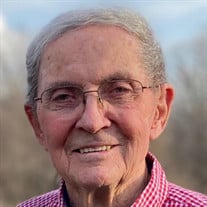 Dixon Walter Marsh was born to Walter and Doris (Knoop) Marsh on a farm west of Greene, Iowa on July 30, 1934 where he lived for nearly his entire life. He passed away at MercyOne North Iowa Medical Center West Campus on December 21, 2021 at the age of 87 years. A Celebration of His Life will be held 11:30 AM, Friday, January 7, at First Baptist Church, 105 Chapel Lane, Charles City, with Pastor Matt Howlett of First Baptist Church and Pastor Daniel Flucke of St. Peter Lutheran Church, Greene presiding. Dixon was a loving and caring husband, father, grandfather, brother, son, and friend. So many lives were touched by his kind spirit. The people who knew him so greatly appreciated his warmth and compassion for others. He put his heart and soul into everything he did. Dixon graduated from Marble Rock High School in 1953, then served his country in the Army starting in the United States in November of 1954 before being shipped to Germany in early 1955 and serving until September 1956. Dixon married Marlene Jacobson over 62 years ago on August 16, 1959 at Trinity Lutheran Country Church near Rake, Iowa. To this union, were born three daughters Dawn, Lisa, and Valerie. He was a successful businessman who farmed for over 50 years, sold DeKalb seed corn for 40 years while winning many awards, and became a Realtor. His interests included music, and hunting, and a lifelong love of learning. He had a strong desire to acquire knowledge of all kinds and solve problems. He was a member of 4-H and Boy Scouts during his youth, and as an adult was a member of the Lions Club, and helped the Marble Rock Historical Society. He also loved music, sang, and played instruments. He demonstrated positive thinking throughout his life. Dixon had a kind and loving spirit and a special ability to foster friendships. Cherishing the people who he deeply cared about was very important to him. Even as he sold seed corn, he said that his relationships with his customers were more important than making a sale. He respected others and developed lifelong friendships with people who knew he was earnest. His Christian faith was important to him and he shared it with others. He served his church as a Sunday School teacher and also as a Deacon, and was able and willing to give the sermons when the pastor was on vacation. He lived a long life full of rich experiences and had wonderful moments spent with others. The memories of these times and of what a wonderful person he had repeatedly shown himself to be will continue to live on even in his passing. The legacy of who he was and everything which he had been able to accomplish in his lifetime will not be forgotten. He is survived by his wife Marlene, daughter Dawn Marsh-Wulff and husband Marvyn Wulff of Mason City, Iowa, daughter Lisa Marsh Zilka and husband Brad Zilka of Shoreview, Minnesota, daughter Valerie Marsh Thacker and husband Matt Thacker of Johnston, Iowa, sister Pat Fluhrer and husband Bill, brother Dennis Marsh and wife Nancy, grandson Mason Zilka, and granddaughters Marnie Lubratt and husband Matt, Erica Thacker, Miranda Wulff, Brooke Thacker, Dana Thacker, Camryn Zilka, and Paige Thacker. He is also survived by his wife Marlene’s family who deeply loved and respected him. He was preceded in death by his father Walter Marsh, mother Doris (Knoop) Marsh, his brother Donovan Marsh, and his sister-in-law Margaret Marsh. In lieu of flowers memorials may be directed to the Family or First Baptist Church, at PO Box 219, Greene, Iowa 50636

Dixon Walter Marsh was born to Walter and Doris (Knoop) Marsh on a farm west of Greene, Iowa on July 30, 1934 where he lived for nearly his entire life. He passed away at MercyOne North Iowa Medical Center West Campus on December 21, 2021 at... View Obituary & Service Information

The family of Dixon Walter Marsh created this Life Tributes page to make it easy to share your memories.

Send flowers to the Marsh family.