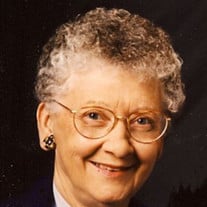 Dolores Schear, 84, died Thursday July 14, 2011 at the Franklin General Hospital Nursing Facility in Hampton, Iowa. She was born October 25, 1926 in Hampton to John and Edith (Mulkins) Price. Dolores graduated from Hampton High School in 1944. Following graduation, Dolores and a group of girlfriends moved to Washington DC where she worked for the War Department for a short period. At that time, young single girls were not allowed to rent an apartment by themselves and they needed to acquire sponsorship. Upon returning to Hampton, she was united in marriage to Donald Schear on September 15, 1946. They had two children, Michael from Charles City and Cynthia who passed away in 1993 from breast cancer. Dolores worked at the Hampton High School as a cook from 1963 until retirement in 1991. Her greatest remembrance was the many kids she got to know that passed through her lunch line over the years. She was a member of the United Methodist Church in Hampton, the CG Mother's Club, the Retired School Employees Organization, the Leah Circle, and was also a volunteer and supporter for many causes. Dolores enjoyed spending time with her family and friends. She loved cooking for everyone and considered herself an excellent cook. One of her pride and joys in her life was her only grandchild, Chris. She was always so proud of everything he did and would keep her friends informed of his achievements. When her two great grand children (Alex and Zach) came along, she remarked that she was finally "a great grandma". She is survived by her son Michael (Marlene) Schear of Charles City, grandson Chris Schear and special friend Jami Maifeld of West Des Moines, great grandchildren Alex and Zach, honorary great grandchildren Emma and Jenna, and numerous nieces and nephews. She was preceded in death by her parents, John and Edith Price, husband Donald Schear, daughter Cynthia Schear Bejarano, sister Velma Reynolds, and brothers Charles Price and Bernard Price. Memorials may be directed to the family. Burial will take place in the Hampton Cemetery.

The family of Dolores Schear created this Life Tributes page to make it easy to share your memories.

Send flowers to the Schear family.