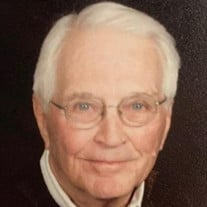 Don Clay was born June 18, 1927, in Franklin County, Iowa to Doris (Shroyer) and Lawrence Clay. He passed away at Cedar Ridge Village Care Facility in West Des Moines on Tuesday, March 22nd, 2022, just a few months shy of 95. Don spent 88 years of his life on his family farm south of Hampton, Iowa, and was proud of the Heritage Award granted to the farm for over 150 years of ownership in the same family. His ancestors spanned four generations to one of the pioneers of Franklin County, Levi Jones. Don was a farmer, served in the Navy, and graduated from Iowa State University with a degree in forestry. Don also spent many years as an agent for Franklin County Farm Bureau. He was an avid gardener and fisherman, and found happiness with his family and many friends. On June 1st, 1957, Don was married to Kae Lenor Kessler, a lovely young school teacher he met in the Methodist Church choir in Hampton. They settled on the family farm, where they spent the greater part of their 60-year marriage. Don and Kae had three children, Larry (wife Manoli, daughter Jessica) who resides in Jaen, Spain, Scot (wife Kristen) living in New Hartford, Iowa, and Angie (husband Dr. Bill Nowysz and sons Alex, Daniel (wife Cheer), and Thomas) who live near Adel, Iowa. Don was preceded in death by his wife, Kae, and parents Lawrence and Doris (Shroyer) Clay, brother Thomas (wife Vernelle), and sister Mary Schulz (husband Dwight). Memorial services are to be held Saturday, April 9th at 11 a.m. at the Hampton United Methodist Church, lunch to be served following the service. Memorial contributions may be made out to the Hampton Lions Club or Hampton United Methodist Church. The Counsell Woodley Funeral Home of Hampton is caring for Don and his family.

The family of Donald Lawrence Clay created this Life Tributes page to make it easy to share your memories.

Send flowers to the Clay family.