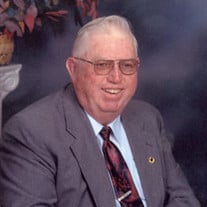 Donavon Dean Worley, 79, of Greene, Iowa, passed away May 23, 2010, at the Muse Norris Hospice Inpatient Unit in Mason City, Iowa. He was born on June 3, 1930, in Bristow, Iowa, to Hubert L. and Lola G. (Kanter) Worley. Donavon attended country school and then graduated from Greene High School in 1948. He was united in marriage to Marian Grace DeVries on December 6, 1953, at the Evangelical United Brethren Church in rural Sheffield, Iowa. Donavon started farming with his parents and driving on his truck routes in 1948; he later partnered with his son Kevin in 1980, along with taking care of his cattle and his hog farrowing operation. He sold and delivered eggs for fifteen years for Donavon Produce, which supplied local groceries stores in Aredale and Dougherty; he also drove a milk truck and was a meter reader for Butler County REC for twenty years. Donavon was a member of the West Fork United Methodist Church, the Aredale Elevator Board and the Rockwell Telephone Board; he served on numerous church committees and helped with janitorial work at the West Fork United Methodist Church. He loved to roller skate, play volleyball with family and friends, go bowling and do carpentry jobs throughout the area. Donavon is survived by his wife Marian Worley of Greene, children Linda (Mike) Pettey of Rockford, Carol (Allan) Woodley of Parkersburg, Kevin Worley of Greene and Glenda Thomas and fiancÃ© Davin Graffin of Waterloo, sister Joyce (Gerald) Krukow of Mason City, sister Edith (Don) Hodges of Marshalltown, brother-in-law Darwin Ebling of Greene, eight grandchildren and nine great-grandchildren. He was preceded in death by his parents Hubert and Lola, sister Fonda Ebling and granddaughter Brittney Ann Sprague.

The family of Donavon Dean Worley created this Life Tributes page to make it easy to share your memories.

Send flowers to the Worley family.