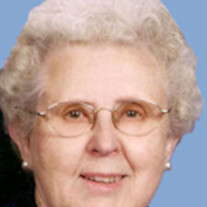 Doris Jean Craighton, 88, of Gardner, Kansas, formerly of Hampton, Iowa, passed away January 12, 2011, at Medicalodge of Gardner. She was born March 9, 1922, in Hampton, Iowa, to August and Edna Whitehead Kothenbeutel. Doris graduated from Hampton High School in 1939. She spent most of her life in Hampton, Iowa, lived in Arkansas for 25 years and moved to Gardner in 2010. Doris married Keith E. Craighton on November 25, 1945, in Hampton, Iowa. She worked as a telephone operator for Southwestern Bell and was a member of the United Methodist Church in Hampton. Doris also enjoyed crocheting and making special baby blankets for her great grandchildren. She loved to read and work puzzles. Doris was preceded in death by her parents, five brothers, one sister and son-in-law Charles McKay. She is survived by her husband, Keith, of the home; daughters Kathleen Coverdale and husband Harold, Pensacola, FL and Nancy McKay, Gardner, KS; five grandchildren and nine great-grandchildren. Burial will take place in the Hampton Cemetery. Memorial contributions may be made to the Hampton Senior Citizen Center.

The family of Doris Jean Craighton created this Life Tributes page to make it easy to share your memories.

Send flowers to the Craighton family.