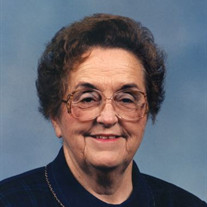 Dorothy May Meyer, 86, of Hampton, formerly of Ackley, passed away Monday, September 7, 2015, at the Rehabilitation Center of Hampton in Hampton. She was a child of eight children born on September 13, 1928, to William and Ella (Roegner) Knipfel, on the farm in Franklin County, Iowa. She was not named until December 25, when her Aunt Marie Peters gave her a doll for Christmas with the name tag on it with the name Dorothy May Knipfel. From September 13 to December 25, she was known as Babe Knipfel. Dorothy was baptized at the St. John's parsonage by Rev. Ernest Siebold of Ackley. She attended country schools no. 1 and no.6 in her rural Franklin County neighborhood and graduated from eighth grade with a desire to be a nurse. Dorothy began a working career at the age of 12 and 13, with cleaning houses and taking care of children for her family and neighborhood families. On July 26, 1953, Marvin Frank John Meyer and Dorothy May Knipfel were united in marriage at the Little Brown Church in Nashua. They were members of St. John's United Church of Christ in Ackley. Dorothy was also a member of the Sunshine Circle and was a very active member of TOPS. In 1981, she was awarded the Tops chapter best weight loser and in 1982, she was crowned queen for central Iowa; she maintained that weight goal for many years. In her young woman adult years, she was employed at the Hampton CafÃ© in Hampton and the Geneva Home CafÃ©, which was owned by Jack and Lula Stackhouse, who became second parents to her with much love. During the 1960's era, she was employed at Woodley's CafÃ© in Ackley, and in the early 1970's era, she was employed at the Tip Top Drive-In and Big Chief, which was owned by Marvin and Jean Walters, who were not only her employers but were also good friends. As Haley Kramer was growing up, Dorothy took care of her and was known as Grandma Dorothy. During the mid 1970's, she worked at the Ackley Canning Factory, and from 1977 to May 1, 1990, she was employed at Dodger Manufacturing in Eldora. Dorothy enjoyed her retirement visiting Darwin and family as much as possible. She also enjoyed traveling with Luella on their annual mystery trip each September, where there would be quite a surprise waiting for her. She would also go on bus travel trips and on day trips with family and friends. Dorothy is survived by her son, Darwin and friend Lale Wehling of Independence and two grandchildren Michael and Marina of Independence; daughter, Luella and husband Dan Rodemeyer of Hampton; and brother Arnold Knipfel of Ackley. She is also survived by honorary daughters Jessica Allbee and Terri Owen and honorary granddaughter Haley Kramer. Dorothy was preceded in death by her parents William and Ella, husband Marvin, brothers Harley, Merle, Earl and Raymond Knipfel and sisters Florence Harms and Mabel Meyer.

Dorothy May Meyer, 86, of Hampton, formerly of Ackley, passed away Monday, September 7, 2015, at the Rehabilitation Center of Hampton in Hampton. She was a child of eight children born on September 13, 1928, to William and Ella (Roegner) Knipfel,... View Obituary & Service Information

The family of Dorothy May Meyer created this Life Tributes page to make it easy to share your memories.

Dorothy May Meyer, 86, of Hampton, formerly of Ackley, passed...

Send flowers to the Meyer family.