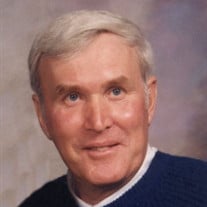 Edward Eino Hansen, 74, of Hampton, Iowa passed away Saturday, January 31, 2015 at Mercy Medical Center in Mason City, Iowa. He was born June 29, 1940, in rural Hampton, to Eino and Lucille (Bonjour) Hansen. Ed was confirmed in the Trinity Lutheran Church of Hampton on April, 11, 1954. Ed graduated from Hampton High School in 1959. While he was in high school he was president of the FFA and earned the prestigious Iowa Farmer Degree. Ed served in the US Army from 1960-1963 as a Sp 4 Postmaster in Regensburg, Germany. He was united in marriage to Judi Newport at the United Methodist Church of Hampton on September 14, 1963. Ed joined the United Methodist Church of Hampton in 1963 where he served in many positions over the years. Ed and Judi farmed north of Hampton for over fifty years. Their farm included grain and livestock operations. He enjoyed fishing, golfing, watching the Twins, Brewers, and Green Bay Packers games, and attending his grandchildren's activities. Over the years he was a Mott Township Trustee, former Lions member, American Legion member, and board member of the Chapin Coop. He had a great sense of humor. His three children laughed when he told them his three proudest accomplishments were not them, but his Iowa Farmer Degree, finishing the Lalapalooza at Bridgeman's ice cream, and ringing the bell at the Minnesota State Fair. He loved to travel to the old west, especially the Custer Battlefield site. Ed is survived by his devoted wife, Judi (Newport) Hansen, of Hampton, daughter Colleen (Clay) Love of Edina, Minnesota, son Ron (Paige) Hansen of Hampton, daughter Kelly (Ted) Minette of Liberty, Missouri. Grandchildren Ryanne Hoogenboom, Eric Love, Jennifer Pierson, Patrick Hansen, Haylee Hansen, Max Minette, and Kate Minette. Great grandchild Caelyn Pierson-Love. Brothers Harold (Jo) Hansen of Mason City and Jim (Pam) Hansen of Hampton. Brother in laws Ron (Nancy) Newport of Fridley, Minnesota and Dick (Jeanne) Newport of Berlin, Wisconsin. Aunt and Godmother, Lillian Cantebury. Several nephews and nieces. Ed was preceded in death, by his parents, father and mother in law, Virgil and Vivian Newport, foster sister Jenny Jensen. In lieu of flowers memorial money will be distributed to Ed's favorite community organizations.

The family of Edward Eino Hansen created this Life Tributes page to make it easy to share your memories.

Send flowers to the Hansen family.