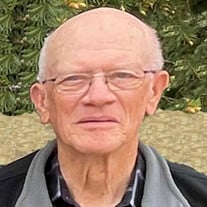 Edward E. Keith, 79, of Marble Rock passed away on April 19, 2022, at MercyOne North Iowa in Mason City. Services have been entrusted to Counsell Woodley Funeral Home in Greene. Private Funeral service will be held at St. Paul Lutheran Church in Marble Rock with Pastor Daniel Flucke officiating. Burial will be in the Westside Cemetery, Marble Rock. Public Visitation will be held from 4:00 – 6:00 p.m., Sunday, April 24, at Counsell Woodley Funeral Home, 519 N. First St. Greene. Edward was born on April 28, 1942 the son of Roy Edward and Viola M. (Debner) Keith. He attended public school in Marble Rock and graduated from Rockford High School in 1960. He attended Wartburg College graduating in 1964. Edward served in the Army National Guard for a number of years. Edward was a member of St. Paul Lutheran Church in Marble Rock. Edward married his high school sweetheart, Karen Schrage, at the Presbyterian Church in Greene on May 3, 1964. The couple was blessed with two children. He was a hard worker all his life. He began working with his father and brother to learn the farming operations. He and his wife enjoyed country life on the farm. Edward worked in Management for Oliver Tractor, later White Farm in Charles City for over 29 years. He worked for Unverferth in Shell Rock for five years. Edward then worked for BMD in Klemme, where he later retired. Edward was a devoted husband, father and grandfather. He brought his children up to value hard work, instilling in them a work ethic that would carry them throughout life. Despite his busy work schedule he always made time to attend his grandchildren’s school activities and sporting events. Edward was a kind, humble, supportive individual that was very family orientated. He will be greatly missed. As a young man he like to hunt fox. As an adult he enjoyed fishing, going on trips to Canada and spending time with family. He was an avid Hawkeye fan and enjoyed watching the Cubs and Vikings. Living family members include his wife of almost 58 years, Karen; two children: Brian (Angela) Keith, Marble Rock, Daphne (Barry) Landers, Greene; five grandchildren: Tyler Keith, Dylan Keith, Gabrielle Keith, Josie Landers, Mallory Landers; sister, Judy (Charles) Schnack; Brother, David (Linda) Keith. Edward was preceded in death by his parents, Roy and Viola Keith and his in-laws Roy and Eva Schrage. Those planning an expression of sympathy may direct memorials to the Edward Keith Memorial Fund, P.O. Box 38, Greene, Iowa 50636.

The family of Edward Everett Keith created this Life Tributes page to make it easy to share your memories.

Send flowers to the Keith family.