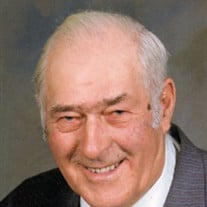 Emil August Noelck, 96, of Hampton, Iowa, passed away, Tuesday, February 19, 2013, at the Franklin General Hospital Nursing Facility in Hampton, Iowa.Â  He was born January 5, 1917, in Arcadia, Iowa, to William and Margaret (Herrmann) Noelck.Â  Emil attended country schools.Â  He was married on March 15, 1941, at Trinity Lutheran Church in Audubon County, Iowa, to Inger Marie Faaborg, and they enjoyed 62 loving years together.Â  He farmed in the Kimballton area for many years and then moved his family to the Hampton area in 1960. Emil worked at Farmers Hybrid and Seabee Corporation, but he was always a farmer at heart.Â  He was a member of the St. Paul's Lutheran Church in Hampton, he was also a church board member at the Kimballton Lutheran Church and the St. John's Lutheran Church, and was on the school board for Sharon Township # 8 country school.Â  He had a wonderful sense of humor. Emil enjoyed family and farming, family fishing trips to Okoboji, living at Beeds Lake, playing Irish pitch at every family gathering, traveling, and just being with people.Â One of his true loves in life was attending all of his grandchildren's sporting activities, rarely missing an event.Â  He is survived by his daughter Jane and husband Roy Overturf of Nashua, son Ivan and wife Karen Noelck of Hampton, son Carl and wife Rhonda Noelck of Latimer, grandchildren Todd Overturf, Joel (Deborah Jackson) Overturf, Niki Overturf, Is (Kristin) Noelck, Isaac Noelck, C.J. (Jenny) Noelck, and Jeromy Noelck, great grandchildren Isaiah, Noah, Isabella, Lexi and Caden Noelck, Spring, Harris and Cody Jackson, great great grandchildren Austin, Jennica and Eli, brother Walter and wife Joan Noelck of Ross, sister-in-laws Alice Noelck of Melcher, Ruth Noelck of Geneva,.Â  He was preceded in death by his parents, wife, three brothers Elmer, Melvin and Bill, two grandchildren Tony and Karie. Burial will take place at the St. John's Lutheran Church Cemetery in rural Hampton.

The family of Emil August Noelck created this Life Tributes page to make it easy to share your memories.

Send flowers to the Noelck family.