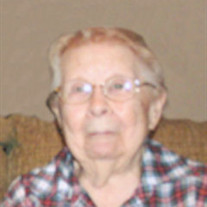 Faye Bonjour, 90, of Ardmore, Tennessee, formerly of Hampton, Iowa, passed away March 15, 2011, at the Hillside Hospital in Pulaski, Tennessee. She was born July 19, 1920, in Clarksville, Iowa, to Harry and Myrtle (Dearth) Heckman. Faye started school at a country school near Shell Rock, Iowa. When she was younger she moved with her family to Hampton in 1925. She was baptized into the Congregational Church with her father and three sisters and a brother by Rev. Michael in 1932. She graduated from Hampton High School in 1939. She was united in marriage to Clarence Bonjour on August 25, 1940, at the Little Brown Church in Nashua. They farmed thirty years in Franklin and Cerro Gordo Counties, retiring to Hampton in 1976. Faye was a homemaker. She was a member of the First Congregational United Church of Christ in Hampton and a former member of the hospital auxiliary. Faye is survived by her sons Richard Bonjour of Ardmore, Tennessee and William (Eloise) Bonjour of Ardmore, Tennessee, grandson, Christopher & Amy, grandson, Timothy & Sarah and their children Carissa, McKinley and Caleb, grandson, Mike and his children Teisa, Teiana, Dakota and Kamu, granddaughter, Kelly & Jay Farrell and their children Taylor, Austin and Autumn, grandson, David & Aran Lang and their children Kayla and Callie and granddaughter, Charlotte Lang, sister Irene Stohr of California and many nieces and nephews. She was preceded in death by her parents, husband Clarence, two sisters, one brother and one granddaughter. Burial will be in the Hampton Cemetery.

The family of Faye Bonjour created this Life Tributes page to make it easy to share your memories.

Send flowers to the Bonjour family.