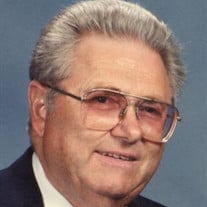 Floyd Clinton "Benny" Benson, 87, of Waterloo, formerly of Dumont, Iowa, passed away on Wednesday, August 2, 2017, at the Shell Rock Healthcare Center in Shell Rock. He was born on April 23, 1930, in Allison, Iowa, to Harold and Mildred (Kibsgaard)... View Obituary & Service Information

The family of Floyd Clinton "Benny" Benson created this Life Tributes page to make it easy to share your memories.