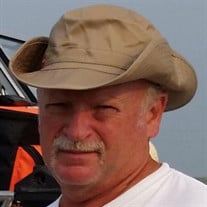 Galen Daniels, 69, of Ackley, passed away Monday, January 17, 2022 at his home, under the care of Care Initiatives Hospice. Funeral services will be 10:30 AM Saturday, January 22, 2022 at the St. John's United Church of Christ in Ackley. He will be laid to rest with full firefighter honor guard at the Oakwood Cemetery in Ackley. Visitation will be from 5-7 PM on Friday, January 21 at the church. Counsell Woodley Funeral Home of Iowa Falls is caring for Galen and his family. Galen Harold Daniels was born on October 3, 1952 to Harold and Johanna (Toomsen) Daniels in Iowa Falls, Iowa. He was confirmed at the EUB Church in Ackley and graduated from Ackley Geneva High School. In 1971 he married Ronda (Freese) Daniels at St. John's United Church of Christ Church in Ackley, where he eventually became a member. Galen worked for Sailer Ford in Ackley as a mechanic, he did maintenance for Farmland Foods, Dodger Industries and Quakerdale until they closed. He then worked for the City of Ackley until retiring in 2019. He could fix just about anything. He also worked part time doing maintenance for Triple T Meats / Family Tradition Meats in Ackley until he became ill in 2021. Galen was a member of the Ackley Jaycees and a volunteer Firefighter with the Ackley Fire Department for 38 years. He passed away at the age of 69, during his last pager test on Monday, January 17th at 6 PM, listening to his favorite music, surrounded by his family. Galen enjoyed gardening, and he was very proud to share his produce with family, neighbors and friends. His grandchildren were very proud of their personalized pumpkins that were engraved for them every fall. He also enjoyed freelance drawing and painting in his spare time, as well as tinkering in his garage, fishing and spending time with friends and family. Galen Daniels is survived by his wife, Ronda of 50 years; three children, Trisha (Pat) Ubben of Ackley, Jason (Shawn) Daniels of Iowa Falls and Amy (Jarred) Frey of Ackley; a sister, Janice Rinnels of Ackley; ten grandchildren and nine great grandsons; brother- in law, Raymond Freese and wife Julie of Sioux City; four nieces, two nephews and two aunts, Marian Witt of Cedar Falls and Berdine (Ray) See of Independence as well as numerous cousins and friends. He is preceded in death by his parents, Harold and Johanna Daniels; mother and father- in law, Fred and Dorothy Freese; brother, Delmar (Marjorie) Daniels of Mason City; brother- in law, Gary Rinnels as well as several aunts, uncles, cousins and friends. In lieu of flowers, those planning an expression of sympathy may wish to consider memorials to the family for a donation to Care Initiatives Hospice and Mayo Clinic Cancer Research.

Galen Daniels, 69, of Ackley, passed away Monday, January 17, 2022 at his home, under the care of Care Initiatives Hospice. Funeral services will be 10:30 AM Saturday, January 22, 2022 at the St. John's United Church of Christ in Ackley. He... View Obituary & Service Information

The family of Galen Daniels created this Life Tributes page to make it easy to share your memories.

Send flowers to the Daniels family.