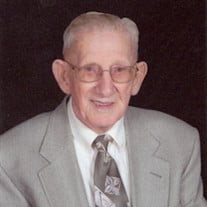 George Reiners, 90, of Dumont, Iowa, passed away November 16, 2010, at the Franklin General Hospital in Hampton, Iowa. He was born February 6, 1920, in Dumont, Iowa, to Jake and Louis (Penning) Reiners. George attended Dumont Community Schools. He served his country in the United States Army Air Force during WWII from 1943 to 1945. George was united in marriage to Edna Mae Meinders on January 7, 1941, in Bethany, Missouri. He worked at Community Co-op, after retirement he drove school bus, a milk route and also worked part time for the Sietsema-Vogel Funeral Home in Dumont. George was a life time member of the Dumont Reformed Church and was one of the oldest living members of the Dumont Reformed Church. He was a member of the Dumont American Legion for sixty-nine years. George was Mayor of Dumont and also was on the Butler County Fair Board. He enjoyed dancing, bowling, reading and sports. George and Edna also hosted foreign exchange students from Greece, Uruguay, Chile, Yugoslavia, Germany and Japan. He loved the Iowa Hawkeyes and spending time with his grandchildren and great grandchildren. George was proud to be apart of the Honor Flight to Washington, D.C., back in September. He is survived by his wife Edna Reiners of Dumont, son Gary and wife Venita Reiners of Fort Dodge, granddaughter Amy and husband Denny Thilges of Johnston and their children Lauren, Madison, Abbie and Jake Thilges, grandson Randy and wife Sabina Reiners of North Liberty and their children Ezra, Mischa and Pryor Reiners, grandson Terry and wife Emily Reiners of Grimes and their daughter Grayce Reiners, sister-in-laws Phyllis Card and Francis Meinders-Severs & brother and sister-in-law Duane and Mary Lou Sieberts. George was preceded in death by his parents Jake and Louis, son Randy, daughter Cindy Reiners and granddaughter Natalie Reiners. In Lieu of flowers, memorials may be directed to the family. Burial will take place in the Dumont Cemetery.

The family of George Reiners created this Life Tributes page to make it easy to share your memories.

Send flowers to the Reiners family.