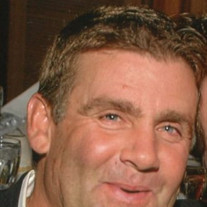 Gerald Irvin Rabey, 54, of Sheffield, Iowa went home to be with his Lord Friday, March 1, 2013, at the Muse Norris Hospice Inpatient Unit in Mason City, Iowa. He was born July 5, 1958, in Le Mars, Iowa to Charles and Mildred (Harter) Rabey. Gerald graduated from Sheffield-Chapin High School and then attended Ellsworth Community College in Iowa Falls, Iowa. On June 4, 1992 Gerald was united in marriage to his beloved wife, Cindy Prall. Gerald was employed as the grounds superintendent at the Ridge Stone Golf Club in Sheffield, Iowa. Gerald accepted Jesus Christ as his Savior and lived his life in devotion to his Lord and his family. Part of that devotion was lived out as he actively volunteered at the Cancer Center at Mercy Medical Center North Iowa in Mason City, Iowa. Gerald was an active member of First Grace Baptist Church in Sheffield, Iowa and he loved and was loved greatly by his church family. Memories of Gerald will be cherished forever by all those who knew him and were inspired by him. Gerald is survived by his wife, Cindy of Sheffield, son Jack Rabey of Sheffield, daughter Megan Toyne of State Center, son Rob Wymore of Cedar Falls, daughter Lindsay Wymore of Ankeny, son Nick Wymore of Coralville, mother Mildred Rabey of Sheffield, brother Bob Rabey of State Center, sister Joelle Henderson of Altoona, brother Jeff Rabey of Omaha, Nebraska, seven grandchildren Lucas, Rylie, Caelor, Gage, Braxton, Jude and Trennen and many nieces and nephews. Gerald was preceded in death by his father, Charles Rabey. In Lieu of flowers memorial may be directed to the family. Burial will take place at the Hillside Cemetery in Sheffield, Iowa.

The family of Gerald Irvin Rabey created this Life Tributes page to make it easy to share your memories.

Gerald Irvin Rabey, 54, of Sheffield, Iowa went home to be with...

Send flowers to the Rabey family.