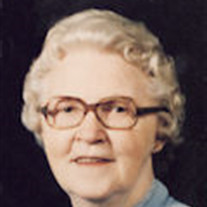 Gladys Ann Orr, 95, of Geneva, Iowa, passed away August 24, 2010, at the Franklin General Hospital in Hampton, Iowa. She was born December 3, 1914, in Dodge Center, Minnesota, to Herman and Emma (Dohrman) Varrelmann. Gladys attended rural country schools. She married Harold Orr on August 21, 1935, at Marion Center Parsonage in Latimer, Iowa. Gladys was a member of the Geneva United Methodist Church. She enjoyed working outside with her flowers, cooking, family gatherings, and visiting with all the people in Geneva. Gladys truly believed Geneva was one of the best places to live and often commented on how much she loved living in Geneva. She also had a great compassion for the many stray cats that she fed over the years by following her father's advise growing up; if an animal was hungry, you should feed it. Gladys is survived by her son Richard (Sheryl) Orr of Warrensburg, Missouri, daughter Marlene (Mike) Schear of Charles City, grandchildren Lynn Collins, InaRae Collins, Tammy Horton, Kevin Collins, Brian Collins, Chris Schear, Linda Jochimsen, Rodney Orr, Mariea Schnor, Dennis Trimble and Laurie Sunken, several great grandchildren & great great grandchildren. She was preceded in death by her parents Emma and Herman Varrelmann, husband Harold Orr, infant son Harold Duane, daughter Mavis Mutschler, grandson David Collins, two brothers, three sisters, and a great grandson. Burial will be in the Hillside Cemetery in Sheffield, Iowa. In lieu of flowers memorials may be directed to the Geneva Uunited Methodist Church.

The family of Gladys Ann Orr created this Life Tributes page to make it easy to share your memories.

Send flowers to the Ann family.