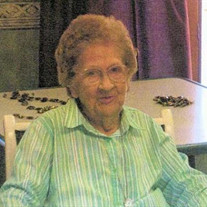 Gladys M. Skarr, 92, of Dumont, Iowa, passed away July 31, 2011, at the Dumont Wellness Center in Dumont, Iowa. She was born July 13, 1919, in Belmond, Iowa, to Harry and Beulah (Guest) Larson. Gladys attended school in Belmond. She lived in Belmond, Mason City and for the last twenty-five years in Dumont. Gladys was united in marriage to Joseph O. Skarr on May 22, 1937, in Belmond. She owned and operated Skarr's CafÃ© & Bus Depot with her husband. Gladys was baptized and confirmed at the Trinity Lutheran Church in Belmond and attended services at the United Methodist Church in Dumont. She enjoyed cooking and baking for her family, spending time with her grandchildren and great grandchildren, making special pillows for her family and playing bingo. Gladys is survived by her daughter Kay Studer of Des Moines, son Jay (Carol) Skarr of Dumont, grandchildren Deann Howell of Dumont, Tammy Yescas of Sioux City, Jason Skarr of Mason City, Jeremy Skarr of Las Vegas, Nevada, Julie (Jesse) Boelsen of Mason City, great grandchildren Tyler Rowe of Hansell, Joey and Chris Howell of Dumont, Javier and Andres Yescas of Sioux City and Braden Boelsen of Mason City. She was preceded in death by her parents Harry and Beulah, husband Joseph, son Gary and son-in-law Don. Burial will take place in the Belmond Cemetery. Memorials may be directed to Hospice, the New Hope Parish of the United Methodist Church in Dumont or to the Dumont Wellness Center.

The family of Gladys M. Skarr created this Life Tributes page to make it easy to share your memories.

Send flowers to the Skarr family.