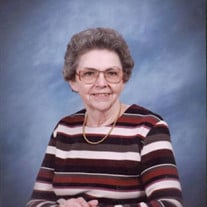 Glenna Jean Mutschler, 76, of Iowa Falls, died on January 19, 2012 at the Heritage Care Center in Iowa Falls. She was born on September 14, 1935, in Clarke County, Iowa, the daughter of Glenn and Geraldine (Charles) Allen. Glenna graduated high school in the early 1950s and received training in medical and x-ray technology. On February 1, 1957, she was united in marriage to Marvin M. Mutschler at the St. Luke Parsonage in Grand Pass, Missouri. On May 31, 1957, she was baptized at St. Peter's Evangelical Reformed Church. Glenna worked as a medical laboratory and x-ray technician at the Iowa Falls Hospital, Dr. Bob Johnson's office in Iowa Falls, and Franklin County Medical Center, retiring in the late 1990s. She was a member of St. Peter's United Church of Christ in Geneva, the Order of the Eastern Star Chapter 342 and a member of the State and National level of Medical Laboratory and X-Ray Technicians. Through her life, she exhibited a love of family and was always supportive of all family members, especially nieces and nephews. She was interested in genealogy and enjoyed looking into her ancestry. Glenna was recognized with an award for Outstanding Service by the Medical Laboratory and X-Ray Technician Association in the early 1990s. After her retirement, she enjoyed her morning coffee groups. Glenna is survived by two brothers, Irvin (Celeste) Allen of Huxley, Iowa and Charles (Beverly) Allen of Ankeny, Iowa, a sister, Ellen Allen of Camarillo, California, two sisters in law, Freda Emerson of California and Anna Mae Weikert of Iowa Falls, Iowa, a God Daughter, Julie Furman of Dallas, Texas, numerous nieces and nephews, and great nieces and nephews. She was preceded in death by her parents, her husband, and brother and sister in laws, Elmer and Henrietta Mutschler, Eime and Dorothy Dohlman, Lester and Edith Mutschler, Robert Weikert, Richard and Lorraine Mutschler, Edward and Mavis Mutschler and James and Lois Mutschler. The family would like to thank the staff of Heritage Care Center, in Iowa Falls, for their patience and love in caring for Glenna. In lieu of flowers, memorial contributions may be made to Heritage Care Center, 2320 Washington Avenue, Iowa Falls, Iowa 50126. Burial will be in the St. Peter's United Church of Christ Cemetery.

Glenna Jean Mutschler, 76, of Iowa Falls, died on January 19, 2012 at the Heritage Care Center in Iowa Falls. She was born on September 14, 1935, in Clarke County, Iowa, the daughter of Glenn and Geraldine (Charles) Allen. Glenna graduated... View Obituary & Service Information

The family of Glenna Jean Mutschler created this Life Tributes page to make it easy to share your memories.

Send flowers to the Mutschler family.