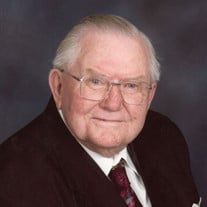 Harold R. Dodd, 97, of Hampton passed away July 10, 2013, at the Muse Norris Hospice Inpatient Center in Mason City, Iowa. He was born May 19, 1916 on a farm west of Chapin, Iowa, to William A. and Stella (Crain) Dodd. Harold attended country school in rural Franklin County. He served his country in World War II in the United States Army. He landed on Utah Beach on "D-Day + 6" (6 days after the landing on Omaha Beach). He remained in the Germany and France area until the end of the war. While training in the United States, prior to overseas duty, Harold was married to Helen Lavonne McDowell on July 1, 1943, in Hampton, Iowa. A son, Dennis was born on May 2, 1944. Following the war, Harold and family returned to Franklin County and moved to a farm Northeast of Hansell. A son, Dean, was born on May 29, 1947 and the family moved to a farm south of Rockwell, Iowa. Mary was born on December 22, 1948. The family was active in the Rockwell Methodist Church. Harold served as the Sunday School Superintendent for several years. He was also active with the Farmers Coop, Farm Bureau and the Cerro Gordo County Extension Service. In 1958 the family moved to a farm near Palmer, Iowa in Pocahontas County. The family remained active in the United Methodist Church while Harold became the adult Sunday School Teacher and was elected to several positions on the Church Council. He was also elected to the Pocahontas County Soil Conservation Board of Directors and the Farm Bureau County Board of Directors. In addition, he was elected to the Pocahontas County ISU Extension Service Board. Harold and Lavonne moved back to Franklin County in 1971 where they began farming in partnership with son, Dean. Both Harold and Lavonne remained active in the West Fork United Methodist Church. Harold became the Chairman of the Franklin County Soil Conservation Service Board. The Dodd's were named the winners of the Iowa North Central District Owner-Operator Soil Conservation Award in 1976. In 1980 the partnership of Harold and Dean won the Conservation Tillage Division of the Iowa Corn Yield Contest with a yield of 192.5 bushels per acre. Harold remained active in Farm Bureau, and the ISU Extension Service. In 1983 Harold and Lavonne retired from farming and moved to Hampton. Sadly, in the fall of 1983, Harold lost his lower right leg in a PTO farm machinery accident. To stay active during retirement, Harold joined the Hampton Lions Club, was nominated to a position and served on the Hampton Park Board, became an active member of the Gideon's International and was active with the operation of the Hampton Senior Center while also helping to establish the SHARE Program for the Franklin County Area. Lavonne passed away in 1993 after a 7 month stay at The Hampton Care Center. Harold married Luella (Ballhagen) Draeger at the Hampton United Methodist Church on May 28, 1994. Luella passed away on February 9, 2005. Harold moved to the Franklin Prairie Apartments in October, 2009 before moving to the Sheffield Care Center in June of 2012. Harold's life was spent being a strong supporter of his family, being a good neighbor and helping others. That life of service and farming ended after a brief stay with excellent care at the Muse Norris Hospice Inpatient Center in Mason City on July 10, 2013. Harold is survived by his son Dennis Dodd of Forest City, son Dean and wife Jean Dodd of Hampton, daughter Mary and husband Jon Weber of Palmer, grandchildren Kimberly Jo Dodd of Joice, Danyel Denise Dodd of Lake Mills, Melissa (Steve) Groe of Lake Mills, Doug (Jennifer) Dodd of Iowa Falls, Dwight (Abby) Dodd of Keota, Laura Weber of Fort Worth, Texas, Robert Weber of Manson, great grandchildren Luke, Lexi, Kate and Megan Groe, Dayna and Darby Dodd, and Dalton, Dakota and Drew Dodd. One brother, Lloyd and Elvera Dodd of Hampton. Harold was preceded in death by his parents, wives(Lavonne and Luella), infant daughter Rita Rose, brother Wayne and sisters Mabel Kothenbeutel and Esther (3 years old). Burial will take place in the Hampton Cemetery in Hampton, Iowa.

Harold R. Dodd, 97, of Hampton passed away July 10, 2013, at the Muse Norris Hospice Inpatient Center in Mason City, Iowa. He was born May 19, 1916 on a farm west of Chapin, Iowa, to William A. and Stella (Crain) Dodd. Harold attended country... View Obituary & Service Information

The family of Harold R. Dodd created this Life Tributes page to make it easy to share your memories.

Send flowers to the Dodd family.