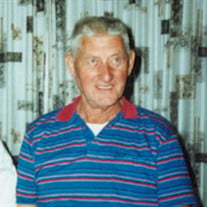 Helmut "Pappy" Neuhaus, 89, of Hampton, Iowa, passed away August 12, 2010, at the Rehabilitation Center of Hampton in Hampton, Iowa. He was born February 6, 1921, in TweelBaeke, Germany, to John and Gesine (Baro) Neuhaus. Helmut was united in marriage to Dora Jurgens on January 1, 1941, in Clarksville, Iowa. He worked with his Uncle farming, trapping gophers, (he was paid 5 cents for each gopher), fishing and raising chickens. After a few years, Helmut farmed his own ground, and then went to work for the Shell Rock Hatchery. Helmut moved his family to Hampton to run the Texaco Station down town. For a few months he worked for Nolte and Stilson Moving Company in Hampton until he was approached by Howard Werner to come work for North Central F.S. Helmut (now nicknamed Pappy by his co-workers at F.S.) was the general manager of the yard at F.S. for 45 years until his retirement in 1995. For over 40 years Pappy & Dora were involved in Boy Scouts, being leaders, baking cookies, going on campouts, helping with badges, chaperoning jamborees and teaching many skills and lessons. He enjoyed being around children, but his own family was his pride and joy. Pappy loved country music and watching Westerns starring John Wayne. He loved hunting elk and deer in Wyoming and fishing at Deer River. Helmut is survived by his wife Dora Neuhaus of Hampton, son John (Jean) Neuhaus of Brookline, Missouri, son Wayne (Gloria) Neuhaus of Forsyth, Missouri, son Dale (Lori) Neuhaus of Racine, Wisconsin, grandchildren Mike, Kevin, Daniel, Carla, Valarie, Jennifer, John Paul, Tyler and Ashley, twenty-two great grandchildren and two great great grandchildren, brother Henry Neuhaus, brother John (Dixie) Neuhaus and sister Maragret (Richard) Miller. He was preceded in death by his parents John & Gesine Neuhaus, son Kenneth Neuhaus, grandson Mark Neuhaus, sister-in-law Wilma Neuhaus and a nephew Stanley.In lieu of flowers memorials can be made to the Hampton Boy Scouts. Burial will be in the Riverside Cemetery.

Helmut "Pappy" Neuhaus, 89, of Hampton, Iowa, passed away August 12, 2010, at the Rehabilitation Center of Hampton in Hampton, Iowa. He was born February 6, 1921, in TweelBaeke, Germany, to John and Gesine (Baro) Neuhaus. Helmut was united... View Obituary & Service Information

The family of Helmut "Pappy" Neuhaus created this Life Tributes page to make it easy to share your memories.

Send flowers to the Neuhaus family.