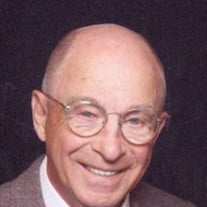 Henry H. (Howard) Ludens HAMPTON - Henry H. (Howard) Ludens, 79, of 1015 1st St. NW, Hampton, Iowa, 50441 died Monday, June 27 at Franklin General Hospital from complications of congestive heart failure. A funeral service will be held at 11 a.m. on Friday, July 1, at Zion Reformed Church, 2029B Jonquil Ave., Sheffield, with the Rev. Arthur Zewert officiating. Interment will be in the church cemetery. Visitation will be from 4-7 p.m. on Thursday, June 30, at the Sietsema-Vogel Funeral Home in Hampton and continue at the church one hour prior to the services. Memorials may be directed to the Henry H. Ludens Memorial Fund, in care of the family, with distribution of funds at a later date to the Franklin General Hospital Foundation, the Hampton Senior Center, Dollars for Scholars (Henry H. Ludens memorial scholarship), and to help fund a new sound system at Zion Reformed Church. Henry was born September 28, 1931, in Springfield, SD, the son of Henry and Annie (Palsma) Ludens. The family later moved to a farm near Lime Springs, IA. He graduated from the Lime Springs High School and from Hamilton Business College in Mason City. He is a veteran of the United States Air Force, having served his country during the Korean War, and is a member of the Veterans of Foreign Wars. He was united in marriage to Shirley Urbatch on September 5, 1958, at the Bethany Lutheran Church in Kensett. To this union two children were born, sons Steven and Brent. Henry was an active member of the Zion Reformed Church where he served on the Consistory, and recently retired after 26 years as treasurer of the Classis CPC Committee. Henry was employed in the Savings & Loan industry for 35 years, retiring in 1993. He served on the Medi-Search Committee in 1976 and helped recruit new physicians to the Franklin Medical Center, including Dr. David Dennis and Dr. Keith Hansen who are still caring for patients at the Medical Center. He was active in the community, having served on various boards, including Hospice, The Hampton Area Chamber of Commerce, Franklin County Development Association, Franklin County Republicans, served 12 years on the FGH Board of Trustees, is a Life Member of the Franklin County Historical Museum, plus others. He was a former member of the Hampton Kiwanis Club, with a perfect attendance for 30 years. For five years, he and his wife have enjoyed delivering meals from the Hampton Senior Center to area shut-ins. He loved family gatherings and enjoyed very much getting together with the grandchildren and trying to beat Ellie in a game of dominoes. A favorite pastime was feeding and caring for the birds, working crossword puzzles, getting together with the Merry Bee's coffee bunch, watching sports on TV and playing Pony Tail and other games with friends. Left to cherish his memory are his wife Shirley of 52 years, son Steven (Lynne) and their children Jonathan and Elissa (Ellie) of Ballwin, MO; Drs. Brent Ludens and Rene` Dutkowski Ludens and their children Meredith and Samuel of Waterloo; twin sister Helena of Orange City; sisters-in-law Marjorie Odden (Bruce) of Northwood, Sharon Dilling (Leland) of Albert Lea, MN, Marilyn Cooper of Kensett, Barbara Walser (Dennis) of Northwood; brothers-in-law Richard Urbatch (Evelyn) of Omaha, NE; Roger Urbatch (Wendy) of Woodbridge, VA; Eugene Van Wyk of Orange City, along with many cousins, nieces, nephews, and friends. Henry was preceded in death by his parents, brothers John and Louis, and sister Grace Van Wyk. "Memories are a treasurer time cannot take away...So may you be surrounded by happy ones today." Helen Steiner Rice Arrangements: Sietsema-Vogel Funeral Home, 306 Central Ave. E., Hampton, IA 50441, 641-456-3232.

The family of Henry H. (Howard) Ludens created this Life Tributes page to make it easy to share your memories.