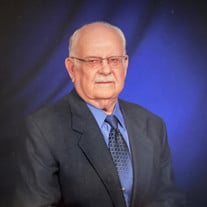 Hilko Viet, 91, of Ackley, passed away Saturday, January 15, 2022 at Grand JiVante in Ackley. Funeral services will be 2:00 PM Wednesday, January 19, 2022 at the St. John's United Church of Christ in Ackley. He will be laid to rest at the Oakwood Cemetery in Ackley. Visitation will be from 1:00 PM until service time on Wednesday at the church. Counsell Woodley Funeral Home of Iowa Falls is caring for Hilko and his family. Hilko John Viet was born on August 20, 1930 to Hilko and Martha (Lauterbach) Viet in Wellsburg, Iowa. Hilko attended country schools. From 1952-1954 he honorably served in the United States Army. On July 6, 1953 Hilko was united in marriage to Bernice Van Eschen at St. John’s United Church of Christ in Ackley, Iowa. Hilko worked as a farm hand and then ran his own farm for a period of time. Throughout his working years he worked at Farmland Foods in Iowa Falls, he also refinished furniture and was bank messenger for Green Belt Bank in Ackley, Iowa. Dad was a wonderful caretaker of mom, putting her needs before his own. He was proud of his children and grandchildren and enjoyed spending time with them. He loved going to his grandchildren’s and great-grandchildren’s church, school and sporting events. He was always willing to help his family with any projects he could. He was an avid reader of the news and kept up on everything happening locally. Hilko Viet is survived by his wife, Bernice Viet of Ackley, Iowa; children, Randy (Marilyn) of Alden, Deb (Don) of Ackley, Mike (Tracey) of Ackley, Tom (Tammy) of Geneva and Janice (Doug) Grace of Rochester, Minnesota; eleven grandchildren; twenty-five great-grandchildren; four great-great grandchildren; three step grandchildren and five step great-grandchildren. He is also survived by his brother, Bernard (Norma) Viet of Ackley, Iowa, and sister, Esther Dickes of Hoffman Estates, Illinois. He was preceded in death by his parents, his sisters, Wilma Schultz, Francis Flessner, Jennie Mae Janssen, Marlys Arends and an infant brother.

Hilko Viet, 91, of Ackley, passed away Saturday, January 15, 2022 at Grand JiVante in Ackley. Funeral services will be 2:00 PM Wednesday, January 19, 2022 at the St. John's United Church of Christ in Ackley. He will be laid to rest at the Oakwood... View Obituary & Service Information

The family of Hilko Viet created this Life Tributes page to make it easy to share your memories.

Send flowers to the Viet family.