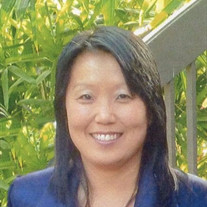 Holly Sue Houser Simons, 50, of Hampton, formerly of Belmond, passed away September 2, 2014, at the St. Mary's Hospital in Rochester, Minnesota. She was born September 8, 1963, in Wonju, Korea, her parents are Robert and Verda (McMillen) Simon. Holly graduated from Urbandale High School, and then attended American Institute of Business where she graduated with a Court Reporters Degree. She was married on October 24, 1987, in Belmond, Iowa to Michael Houser, he passed away in 2002, she was then united in marriage to Scott Simons on February 19, 2011, in Des Moines, Iowa. Holly worked as a court reporter for many years for District Court Judge Stephen P. Carroll and also for TSP Court Reporting, where she truly enjoyed her work. She was a member of the United Methodist Church in Hampton. Holly enjoyed vacationing, fishing, running, her cats, spending time with her family and friends and quietly doing things for other people. She is survived by her husband Scott Simons of Hampton, son Brendan Houser of Urbandale, daughter Megan Houser of Boone, son Kyle (Darriel) Simons of Bradford, Kasey (Christine) Simons of Hampton, Kris Simons of Latimer, Mallory Simons (Ryan Huffman) of Hampton, parents Robert and Verda Simon of Urbandale, sister Deborah (Roger) Krienert of Le Mars, brother Scott Simon of Des Moines and three grandchildren. Holly was preceded in death by her husband Michael. In lieu of flowers, memorials may be direct to the Mayo Clinic for Cancer Research or the Holt International Children's Services. Burial will take place at the St. Frances Xavier Catholic Church Cemetery in Belmond, Iowa.

Holly Sue Houser Simons, 50, of Hampton, formerly of Belmond, passed away September 2, 2014, at the St. Mary's Hospital in Rochester, Minnesota. She was born September 8, 1963, in Wonju, Korea, her parents are Robert and Verda (McMillen) Simon.... View Obituary & Service Information

The family of Holly Sue Houser Simons created this Life Tributes page to make it easy to share your memories.