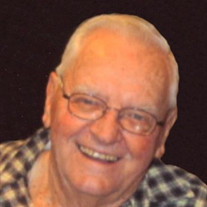 Howard Leroy Abbas, 85, of Hampton, Iowa, passed away Tuesday, January 21, 2014, at his home in rural Hampton, Iowa. He was born on December 8, 1928, in rural Franklin County, Iowa, on a farm north of Ackley, the third son of Mell and Caroline "Carrie" (Sailer) Abbas. Howard was baptized and confirmed at the St. Peter's Evangelical and Reformed Church in rural Geneva. He graduated from the Geneva Consolidated High School in 1947. After graduating from high school, he worked for the Geneva Elevator, Farmers Hybrid in Hampton and helped on the family farm. Howard answered the call to military service and was inducted into the first draft of the United States Army for two years during the Korean Conflict from 1950 to 1952, while being stationed in Germany: he was often called Honest Abe by his military buddies. Following his honorable discharge from the Army, he was united in marriage to Dorothy "Dotty" May Waldorf on April 19, 1953, at the Hansell United Methodist Church. They celebrated 50 years of marriage in 2003. After the service, Howard worked at the Geneva Elevator until an opportunity to farm became a reality and he farmed until he retired in 1993. He farmed in the Geneva, Latimer and Hampton areas. After retirement, he continued to help with the field work. Howard was a lifelong member of St. Peter's United Church of Christ in rural Geneva, where he served one term as President on the church council and was on the Cemetery board; he was also a member of the Ackley American Legion. In 1976, he went on a lifetime adventure of fishing in the far reaches of northern Saskatchewan on Russell Lake with his uncle Leo. After retirement, he and Dotty bought a home four miles south of Hampton, where he enjoyed feeding and watching birds and other wildlife. Howard joined his friends in playing golf every week. He also enjoyed fishing, hunting and watching sports on TV, having morning coffee and playing cards with his friends, and gardening and grooming the lawn to perfection. Howard treasured his time with his family, especially his grandchildren and great-grandchildren. Howard is survived by his wife of sixty years, Dorothy "Dotty" Abbas of Hampton; son Steve (Jan) Abbas of Hampton, and their children Tom and Margaret; son Gary (Denise) Abbas of Papua, New Guinea, and their children Carrie (Jeremy) Lohmann and children Paige, Mackenzie, Brevin and Natalie, Joseph Abbas, Angie (Steve) VanEllen and daughter Chloe and Nick (Chamee) Thorne and children Jax and Jady; daughter Renae (Jeff) Lampkin of Pleasant Hill, and their children Chad (Amy) and son Riley, Patrick (Michelle) and sons Thomas and Ethan, Josh (Stephanie) and son Jacob, and Kyle; daughter Nadine (Jon) Baltes of Hampton, and their children Tyler, Hannah (Dan) Freie, and Katelyn; sisters Ruth Abbas of Glenwood, Marge Gallogly of Colorado Springs, Colorado, Ellen (Dean) Weaver of Boone and Mary Ann (Leland) Roegner of Nevada; brother Frederick (Mary) Abbas of Geneva; a very special person in his life who he considered as a daughter, Rhonda Brass; along with numerous nieces, nephews, cousins and friends. He was preceded in death by his parents, three brothers and one infant sister. Funeral services will be held at 11:00 a.m., Friday, January 24, 2014, at St. Peter's United Church of Christ in rural Geneva, Iowa, with Rev. John Hanna officiating. Visitation will be held from 4:00 p.m. to 7:00 p.m., Thursday, January 23, 2014, at the Sietsema-Vogel Funeral Home in Hampton. Burial will take place in the St. Peter's United Church of Christ Cemetery. In lieu of flowers, those planning an expression of sympathy may send memorials to Hospice of North Iowa.

Howard Leroy Abbas, 85, of Hampton, Iowa, passed away Tuesday, January 21, 2014, at his home in rural Hampton, Iowa. He was born on December 8, 1928, in rural Franklin County, Iowa, on a farm north of Ackley, the third son of Mell and Caroline... View Obituary & Service Information

The family of Howard Leroy Abbas created this Life Tributes page to make it easy to share your memories.

Send flowers to the Abbas family.