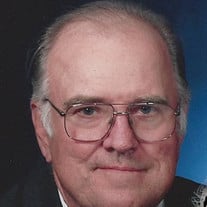 Jack Avery Christiansen, age 77, of rural Coulter, Iowa passed away with Multiple Plasma Myeloma Cancer and complications from that disease on May 11, 2016 at Franklin General Hospital Country View in Hampton, Iowa. He was born January 18, 1939, in Hampton to Everett "Gompy" and Olive "Nan" (Avery)Christiansen. Jack was baptized and confirmed at Nazareth Lutheran Church in Coulter, Iowa. He attended country school and graduated at Franklin Consolidated High School in Latimer. Early in life, Jack picked up milk cans from the local rural area farmers and delivered those milk cans to the creamery in Coulter, Iowa. September 1, 1961, Jack married C. Joy Jensen at the Little Brown Church in Nashua, Iowa. After Jack was married, he served in the Army during the Korean Conflict, 1961 to 1963. After returning from the Army, he continued to haul milk cans and farm. Jack and Joy moved to the home Christiansen family farm in 1977. He continued to farm and work long haul trucking. His son Dave has farmed with him as a child and continues to farm on the Century Farm today. Jack took flying lessons and he was able to get his pilot's license to fly a small aircraft. One of his loves was flying his friend's to Canada to go fishing in his airplane. He would "Buzz" farmyards with his airplane and he flew with his family and grandchildren. Jack had many activities such as bowling, cards, watching dirt-track races, collecting guns, hunting, and Oh, especially marathon golfing. (and golfing some more, and more....) Jack was in many community activities and boards. He attended many of his grandchildren's events. He was a trustee of Morgan Township. He was involved in the Coulter Community Club and volunteered many hours dedicated to Coulter Fish Fry's and other activities to promote Coulter. Jack was a valuable member of the St. John's Church Council. He was a die hard University of Iowa fan and Minnesota Viking fan. He became an avid Iowa State Basketball fan. Jack enjoyed spending many hours watching football, basketball and golf on T.V. Jack touched many lives with his commitment to the Franklin County Alcoholism Service Center and his sobriety. He was on the board for them also. Jack is survived by wife Joy and his two children Dave (Bev) Christiansen of Coulter and Kelly (Steve) Hansen of Milton, Florida. He has four grandchildren, Taylor (Andrew) Legge, Garner Iowa; Carley (Nolan Wilkens) Christiansen, Niota, Illinois; Cole and Kennedy Hansen, Milton, Florida, and numerous nieces and nephews. He was preceded in death by his parents, Everett and Olive Christiansen, mother in law and father in law, Evald and Caroline Jensen, granddaughter Christine (Dave/Bev) Christiansen and brother Jerry.

Jack Avery Christiansen, age 77, of rural Coulter, Iowa passed away with Multiple Plasma Myeloma Cancer and complications from that disease on May 11, 2016 at Franklin General Hospital Country View in Hampton, Iowa. He was born January 18,... View Obituary & Service Information

The family of Jack A. Christiansen created this Life Tributes page to make it easy to share your memories.

Send flowers to the Christiansen family.