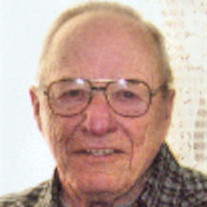 Jack L. Richard, 77, of Stewartville, Minnesota, passed away April 19, 2010, at his home in Stewartville, Minnesota. He was born on December 10, 1932, in Aredale, Iowa, to Walter C. and Margaret (Ritter) Richard. Jack graduated from Dumont High School. He served his country in the United States Army during the Korean War. Jack was united in marriage to Beverly White on May 10, 1953, at the Evangelical Church in Aredale, Iowa. He worked for Richard Brother's Tiling in Aredale for three years and then he worked as a cabinet maker for several establishments including, OC Huston & Son in Hampton for four years, Artley Cabinets in Hampton for twenty three years, Toca Woodcraft in Rochester, Minnesota for five years and Alexander Cabinets which later became L&L Cabinets in Rochester for five years. Jack was a member of the American Legion and a previous member of the United Methodist Church in Hampton. He enjoyed playing municipal baseball in Aredale and High School baseball in Dumont. Jack also enjoyed fishing, hunting, trapping, sports and woodworking. His greatest joy was spending time with those he loved at family gatherings. Jack is survived by his wife Beverly Richard of Stewartville, Minnesota, brother Leon (Verlane) Richard of Theodosia, Missouri, uncle Jeane Richard, aunt Kathryn Richard and numerous nieces, nephews, cousins and friends. He was preceded in death by his parents Walter and Margaret Richard, maternal grandparents John and Letha Ritter and paternal grandparents Ed and Bessie Richard.

The family of Jack L. Richard created this Life Tributes page to make it easy to share your memories.

Send flowers to the Richard family.