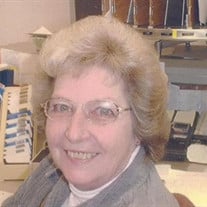 Jacki Atwood Shaver Woodley, 69, of Hampton, Iowa, passed away Saturday, April 21, 2012, at the Muse Norris Hospice Inpatient Unit in Mason City, Iowa. She was born December 5, 1942 in Waterloo, Iowa to Fern and Erma (Crockett) Atwood. Jacki graduated from Glendive High School in Glendive, Montana. She married Gary Woodley on May 17, 1999, in Glendive, Montana. She was a affiliated with the Hampton United Methodist Church in Hampton, Iowa. Jacki worked as a Deputy Clerk of Court in Black Hawk County, then a short time as the personal assistant to a doctor at the Eldora Training School in Eldora, Iowa, and in 1986 she started working at Franklin General Hospital where she worked in various departments. She enjoyed crocheting, making afghans, fishing, camping, boating, working in her flower gardens and puzzles books. Jacki was an avid reader and spent time working and relaxing in garage. She is survived by her husband Gary Woodley of Hampton, son Curtis Shaver of Union, son Douglas Shaver of Witten, step son Reggie Woodley of Seattle, Washington, step son Corey Woodley of Hampton, nine grandchildren, brother Gary Hagen of Tennessee and sister Sandi Hoepfner of Texas. Jacki is preceded in death by her parents, infant son Brian and two sisters Nita and Nancy. Burial will take place at the Hampton Cemetery in Hampton, Iowa

The family of Jacki Woodley created this Life Tributes page to make it easy to share your memories.

Send flowers to the Woodley family.